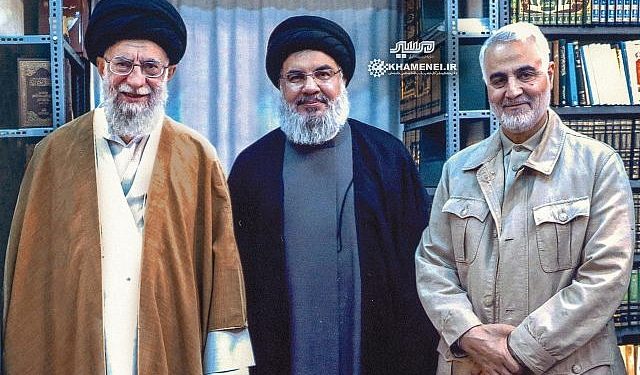 “Concerning the JCPOA, we will seriously continue to reduce our commitments,” Iranian regime supreme leader Ali Khamenei said at a meeting on Wednesday with the commanders of the Islamic Revolutionary Guards Corps (IRGC), referring to the nuclear deal forged with world powers in 2015, formally known as the Joint Comprehensive Plan of Action (JCPOA).

Khamenei’s remarks also discussed foreign policy. The supreme leader claimed that the maximum pressure policy of the United States against his regime has not succeeded. They assumed if they apply the policy of Maximum Pressure on Iran, Iran would accept to compromise with them. To this moment, by God’s grace and power, they learned Maximum Pressure only afflicted themselves with problems,” he said.

In his speech, Khamenei tried to console his commanders by telling them that sanctions have no effect on the regime and encouraging them to continue their terrorist aggressions against other countries. ” The sanctions imposed on oil sales, which is increasingly focused on in the Maximum Pressure policy, is a short-term problem for the country because, in the long run, it has the benefit of breaking the reliance on oil revenues. This tactical pressure helps us strategically.”

Khamenei’s remarks and his regime’s continued malevolent actions show that Tehran intends to continue down the path of causing instability and insecurity in the region and across the world.

Illogical as it may seem, they have no other choice. But why?

The regime’s increased aggressions only show its despair and deadlock, a reflection of the final phases of the life of this regime. The regime and its officials are like drowning people who are grabbing at anything they find. The regime is faced with increasing unrest inside Iran in the past year, protests that continue on a daily basis.

Also, the regime can’t contain the growth of its opposition movement, the People’s Mojahedin Organization of Iran (PMOI/MEK), which continues to expand its activities inside Iran and abroad.

Iran’s economy is on the verge of total collapse because of the endemic corruption in the regime’s institutions and officials. In this context, any desperate action the regime takes will only further push it into the quagmire it has found itself in.

A recent example is the regime’s recent attack against oil facilities in Saudi Arabia in a series of devastating missile and drone strikes in September. A total of 25 missiles and drones were dropped on the Abqaiq Aramco and Khurais oil plants in a targeted attack on Saudi facilities. The Iran-aligned Houthis in Yemen previously claimed responsibility for the launch, which sent the price of oil soaring. But Iran’s main opposition movement, the National Council of Resistance of Iran (NCRI), revealed new intelligence on Monday detailing how Tehran was directly behind the recent attacks on the Saudi facilities. NCRI’s intel also showed the attack was directly ordered by none other than Iran’s Supreme Leader Ali Khamenei.

According to NCRI’s report, Khamenei ordered the attack at a July 31 meeting of the Supreme National Security Council. Regime president Hassan Rouhani and Foreign Minister Mohammad Javad Zarif were both present at the SNSC session.

These facts show the desperate state of Iranian regime and the need for its leader to directly engage himself in such aggressive decisions and remarks. It also shows that this regime does not see its way out of its current deadlock in cooperating with the international community, but to further intensify its provocations and belligerence.

Mrs. Maryam Rajavi, the President-elect of the National Council of Resistance of Iran (NCRI), described Iran’s attack against oil facilities in Saudi Arabia a major step and a new phase in the warmongering aggressions of the religious dictatorship ruling Iran, adding that exerting power and decisiveness is the only language the mullahs understand.

Inaction only emboldens this medieval regime, whose primary victims are the Iranian people, she noted, emphasizing that the ultimate solution to rid the world of Iran’s ruling religious fascism as the source of all crises in the region is changing this illegitimate regime.