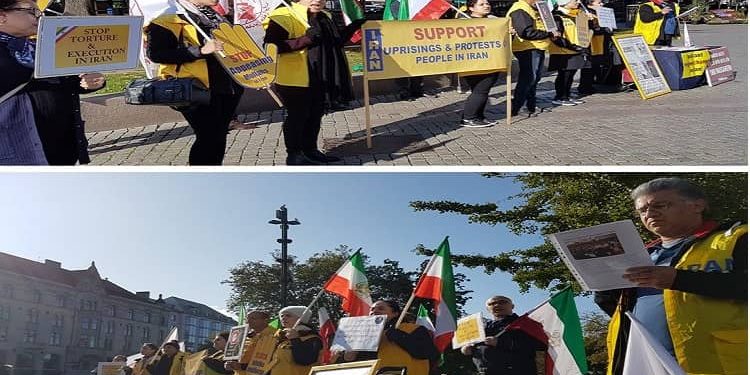 In this demonstration, organized by the Iranian exiles and MEK supporters, the demonstrators set up a book stand and hoisted flags and posters to show their support for protestors in Iran especially the people of Lordegan.

The demonstrators announced their support for Iran’s people protests and exposed the crimes of the regime’s officials and supreme leader in Iran, Iraq and the Middle east.

What you should know about protest in Lordegan

At least 300 people, including children, are believed to have been infected with HIV in southwest province of Charmahal & Bakhtiary by health authorities using contaminated syringes, reports indicate.

People in the village of Chenar Mahmoudi in Lordegan have pointed to medical negligence across the local health care system as the cause of the outbreak.

According to locals, people contracted HIV from needles used by the village’s health organization to test for diabetes two months ago.

The incident has also affected inhabitants of other neighboring villages.

This week, a crowd of residents, mostly women, held a demonstration in front of the governor’s office and the health ministry’s office in Lordegan, protesting regime authorities’ unhealthy practices resulting in the outbreak.

Protesters say the agent from the House of Health had used contaminated syringes for multiple persons to take diabetes tests, leading to the infection of a large number of residents of this village to HIV virus.

Also On Saturday, Iranian exiles, MEK supporters, held a demonstration in Malmö, Sweden, to show their support for the justice movement for the victims of the massacre of political prisoners in Iran.

In the summer of 1988, Ruhollah Khomeini, then-supreme leader of the Iranian regime, issued a Fatwa to massacre thousands of political prisoners, most of them members and supporters of MEK. The victims of the massacre were buried secretly in mass graves in unknown locations.

In addition to the MEK, members of other Iranian dissident groups were also executed during the 1988 massacre.

It’s worth reminding that most of these prisoners had previously been trialed and sentenced. Some of them had even finished their sentence, but were kept in jail and were sent to the gallows of the firing squad during the 1988 massacre.