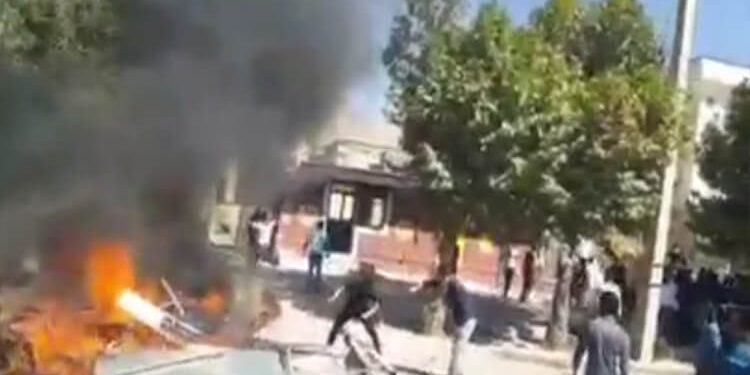 During the past few years, the Iranian people are in different methods displaying their utter hatred and outrage vis-à-vis the mullahs’ regime, using all opportunities to protest state corruption and cruelty. One of the latest protests was the HIV outbreak crisis in Lordegan, southern Iran.

On October 5, anti-government protests erupted in Iran’s Charmahal & Bakhtiary province after it became evident that dirty needles used by the regime’s Health Ministry in Lordegan county infected hundreds of people with HIV.

Angry youth and citizens of Lordegan set fire to the office of the Friday Prayer leader (the mullah acting as the local spokesperson of the regime’s supreme leader Ali Khamenei) as well as a number of other government buildings.

Interestingly, while the protests erupted over the AIDS crisis in Lordegan, the protesters quickly started targeting the regime in its entirety, chanting slogans such as “Death to the dictator,” “Don’t be afraid, we’re all together,” and “Not Gaza, not Lebanon. My life for Iran.” The protesters also called for the regime’s Health Minister to resign.

The Iranian regime’s suppressive forces in Lordegan attacked the town locals protesting against the regime, killing one protester by the name of Saadatollah (Gharib) Mousavi.

However, the people continued their protests unabated.

When regime officials entered the Chenar Mahmoudi village, where hundreds of its inhabitants had been infected with HIV, angry protesters encircled their vehicle and broke its windows.

Protesters encircling the vehicle of regime officials in Chenar Mahmoudi of Lordegan, southern Iran, and broke its windows with bricks and stones

Communities across Iran expressed their solidarity with the risen residents of Lordegan and supported the people of Chenar Mahmoudi, especially victims of the HIV virus infection.

Iran’s regime resorts to propaganda to control the situation

“We have had reports of HIV infections since 40 days ago… We were taking care of the issue in a controlled and silent manner. Two days ago, however, news spread pertaining to the use of dirty needles. These reports are not true,” Namaki added.

If the Lordegan AIDS crisis was, as the regime’s Health Minister claims, not very serious, why did it result in such protests and national solidarity against the regime?

The answer to this question came from Ali Mohammad, the commander of the terrorist-designated Revolutionary Guards (IRGC) in Charmahal & Bakhtiary Province, while referring to the active role of the People’s Mojahedin Organization of Iran (PMOI, Mujahedin-e Khalq or MEK) said, “The [PMOI/MEK] were present in the unrests in Lordegan.”

Akbari stressed he was speaking on behalf of the province’s high council. “The enemy is attempting to incite hatred against the sacred Islamic Republic in the name of the people of Chenar Mahmoudi… The [MEK] were present in the unrests that happened in Lordegan today,” he said.

This again shows the regime’s inconsistency. On the one hand, regime leaders and senior officials constantly describe the MEK as a marginal group enjoying no support inside the country. On the other hand, they lay the blame on the MEK for each and every protest and cases of unrest in Iran.

What regime officials refuse to explain is how the MEK could reach the village of Chenar Mahmoud in such large numbers and in such short notice, and bring along weapons, set fire to government buildings, and chant anti-regime slogans, all while being a fringe group with no influence and support inside Iran!

Following the Lordegan AIDS crisis, Mrs. Maryam Rajavi, President-elect of the National Council of Resistance of Iran (NCRI), said in a statement, “This corrupt and criminal regime has squandered Iran’s national wealth by pursuing nuclear and missile projects and engaging in foreign warmongering, which has destroyed all aspects of life for the people of Iran, including health and well-being.”