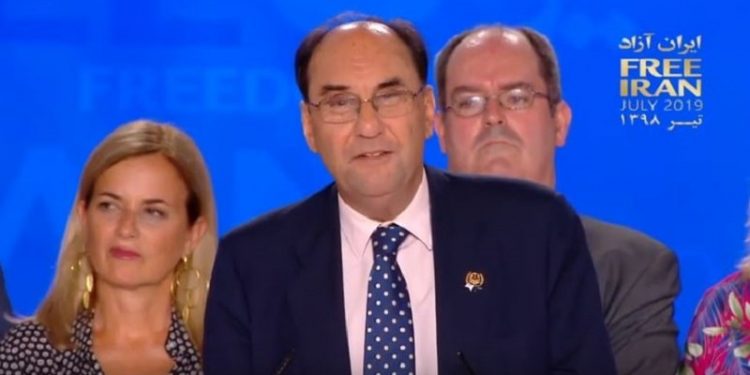 On Saturday 13 july 2019, a large crowd gathered in Ashraf 3, Albania, home to Iranian opposition group People’s Mojahedin Organization of Iran (PMOI/MEK), to hold the annual Free Iran rally of the Iranian resistance. The event was the fourth installment in a series of events held at Ashraf 3.  Dr.Alejo Vidal Quadras gave a speech in this gathering.

Dr.Alejo Vidal Quadres: Dear Mrs. President, dear Ashrafis, dear friends, it is for me a great pleasure and also a great privilege to participate once again in our annual grand gathering. I’ve been attending this magnificent event for 15 years and this is the first time we hold it in Ashraf 3 in Tirana in Albania. [applause] I should say, I should say this is the first time we celebrate our gathering in Ashraf, because Ashraf 3 as Ashraf 2 and Ashraf 1 are one in the same city, the same uninterrupted and unfailing beacon of freedom, democracy, power of will, and hope. Massoud Rajavi has rightly called Ashraf the capital of the PMOI and I want to use this opportunity to express my warmest greetings to him, the historical leader of the PMOI and to wish him well because a free Iran will need him very much.

Dr.Alejo Vidal Quadras also mentioned: I lived the unforgettable experience to visit Ashraf 1 as head of a Parliamentary delegation 11 years ago when it was in Iraq. I witnessed there the incredible miracle the PMOI had done in the middle of the desert, how they transformed a dry and desolate emptiness into a prosperous, alive, creative, and dynamic community. Believe me, for men and women that achieved such wonderful deed, for men and women of that quality nothing is impossible. And you have repeated this gigantic task here in Ashraf 3. Dear Ashrafis, you are unbeatable. This is why I am convinced that sooner more than later the evil regime that for four decades now has oppressed brutally Iran will fall and democracy, freedom, and a decent life will be given to the Iranian people.

Hundreds of martyrs paid with their ultimate sacrifice of their lives both in Ashraf 1 and in Ashraf 2 before those who survived to deadly attacks, to denial of medical assistance, and to the most terrible hardship could finally be transferred to this safe location in Albania, the only country in the world that opened its arms to the PMOI in such number, rescuing them from a fatal fate. This has been said many times tonight, but I want to repeat it because we will never repeat it enough times. We must all pay tribute to the authorities and the people of Albania for such admirable and humanitarian behavior, an example for the rest of nations of the world.

Dr.Alejo Vidal Quadras addedd: Yes, dear friends, Ashraf 1, 2 and 3 are only one Ashraf. There is a (continuing) line made of courage, faith and amazing endurance that has never been broken since the PMOI were founded half a century ago.  And we are here today to say that there will not be an Ashraf 4 because the next Ashraf has already a name. A name blessed by thousands of years of history, by hundreds of generations of a great people, by a wonderful culture built by artists, writers, musicians, thinkers, scientists, craftsmen, farmers and traders along centuries. Ashraf 4 has already a name, and this name is Iran. Iran itself will be the final Ashraf.

Dr.Alejo Vidal Quadras continued his speech telling: The whole country will be our beloved and everlasting Ashraf the day when freedom, democracy, equality between men and women and respect for human rights will reign in a land which has suffered too much and too long under the cruel rule of the most despicable bunch of murderers the east has seen in the last 100 years. The alternative to this nightmare is ready. The alternative exists and it is the NCRI and our leader, Maryam Rajavi. Maryam Rajavi and her dedicated and able team to which I am proud to belong. Yes, dear friends, dear Ashrafis, dear Mrs. President, the next Ashraf is coming. Nothing and nobody can stop it. And its name is Iran. Thank you.

MEK supporters in the Netherlands condemn death penalty in Iran