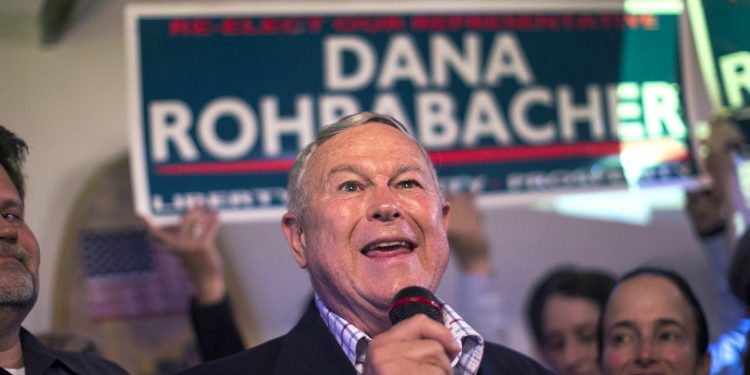 On Saturday 13 july 2019, a large crowd gathered in Ashraf 3, Albania, home to Iranian opposition group People’s Mojahedin Organization of Iran (PMOI/MEK), to hold the annual Free Iran rally of the Iranian resistance. The event was the fourth installment in a series of events held at Ashraf 3.Dana Rohrabacher – Former Member of Congress gave a speech in this gathering.

Dana Rohrabacher: I have a special purpose today. I have a special purpose. I am here just to argue thanks. Because you’ve heard the arguments. You’ve heard it all. Judge Poe just presented to you what some of our great, great speakers and great political leaders and great humanitarians who have already spoke to you, Senator Lieberman, thank you, and Mayor Giuliani, I mean my gosh, Mayor, you’ve got heart, you’ve got soul, we are so proud to have you as our spokesman. Let’s give Mayor Giuliani some applause in there.

And of course, we’ve got friends like Bob Torricelli who we’ve been dear friends all of these years and we’ve worked together, Republicans and Democrats, not because we like you, because we share values with you. The fact is, we all, if Torricelli and Dana Rohrabacher can work together, we and the rest of the people who love freedom in this world can work with you to make it a better world and that’s what this is all about.

And Madame (Rajavi), thank you, God bless you, God bless this movement. This movement will make it a better world. And why that is so important to us Americans, we represent every race, every religion, and every ethnic group. God had a special place for us. And when we look at it, consider ourselves as Americans, we are attracted to people like yourselves who are seeking freedom and seeking a better life for your family. So today, let me just thank you and all of you for what you are dedicating your life to because it will make it a better world for my children. My children will be safer and the children of the United States and throughout the world will be safer if you succeed in eliminating the worst terrorist government on this planet. And their days are numbered. And you will succeed.

And finally, and I say that with confidence, we Americans do believe that freedom will prevail. Everything that you’ve heard from these American speakers today is from their heart. This is what we are taught as kids. And you will prevail. And you will prevail because you have got good people like the people in America but also I’m here to thank the people of Albania. You can be proud of your government. The people of Albania have gone far and more than anyone could ever have expected. Your generosity [applause] the generosity that they have had, the willingness to take criticism and make themselves a target for terrorism on your behalf and the behalf of the good people of this world, they deserve the applause that we—please join me in applauding our Albanian friends. Let’s give them something here.

And finally, let me just say in conclusion—thank you. Thank you, Albanians. Thank you Albanian government, God bless you. And just one last thought. The most powerful force in the world are those people who believe in freedom and are willing to act and put their lives on the line. And today I Have no doubt that you will be successful in your efforts to free Iran from this horrible tyranny.

I want to say to the gangsters, to those people who are corrupt and oppressive and are putting down and putting their thumb on the society in Iran, your days are numbered. Your days are numbered. The people here will carry the cause of freedom to Iran. And let me end with one last thought and that is you are—and I just said to the people of Iran and to those of you who are carrying this message of freedom, you are the most powerful force on the planet.

You will win, and I just say, and I’m not criticizing our president, I think President Trump is terrific and what he’s doing is terrific, but let me just say we do not need a carrier task force off the shore of Iran as long as we have brave people like yourselves and people like the Albanians and others who are standing with you. We will solve this without having to send American military forces into action.

Dana Rohrabacher ended dis speech saying: We will be with you and we will make sure. That is important for all of us to know because our heart and soul are with you and we will make sure that we no longer live presents of billions of dollars to monstrous regimes like we did just a few years ago to the mullahs in Iran. And just remember, have confidence, they’re good people, I’ve spent my whole life working with you folks. And I know you will win and I will be there with you when we go into Tehran and declare the free elections that will take place. Thank you.