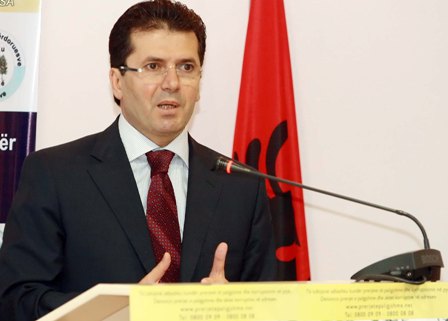 On Saturday 13 july 2019, a large crowd gathered in Ashraf 3, Albania, home to Iranian opposition group People’s Mojahedin Organization of Iran (PMOI/MEK), to hold the annual Free Iran rally of the Iranian resistance. The event was the fourth installment in a series of events held at Ashraf 3. MP Fatmir Mediu Leader of Albania’s Republican Party, former Minister gave a speech in this gathering.

MP Fatmir Mediu: Thank you very much. Dear Madame Rajavi, dear Ashrafis, dear friends from around the world, welcome to Albania and welcome to the beginning of free Iran here in Ashraf 3. I want to thank MEK, NCRI, for bringing here in Albania friends from around the world. This is a special gift for Albanians. Yesterday and today we have heard Mayor Giuliani, Senator Lieberman, a lot of dignitaries talking about what to do more, what’s the next step. And that’s what we have to think. But I think we all agree in one thing, the time for change in Iran is long overdue. American government has stand up against Iran regime and we all hope and wish that also European Union and European countries still stand together as they stand for democratic values, for human rights, for liberty and freedom, they should stand for liberty and freedom of people of Iran as God-given rights.

Last year Albanian government expelled the Iranian ambassador and the deputy ambassador, and some were arrested because they planned a terrorist attack against the people of Ashraf 3 when Mayor Giuliani and us were gathered together to speak about the future of Iran. They will not stop doing whatever they can to create problems and issues for the people here. They’ll do it through media, they’ll do it through actions.  But we will stand together and stop them. We should call the terrorist and state sponsor of terrorism with a name that they deserve.

Madame Rajavi, your 10-point plan is for sure the way for a free Iran. At the same time, it’s an aspiration for all the people that do believe in God-given rights, in freedom and liberty and pursuit of happiness. Here in Albania we have our political differences as Mr. (Michael) mentioned. We have our daily quarrel in politics. We have our political fights. But we are united in your cause in supporting you for free Iran.

Let me end by saying, we would rather be remembered as people that fought for freedom of our people, freedom and liberty of Iranian people, together with you than as people that just watched oppression, killing, terrorism, and did nothing. We don’t want to be the observers of history but doing history. God bless you all. Thank you very much.