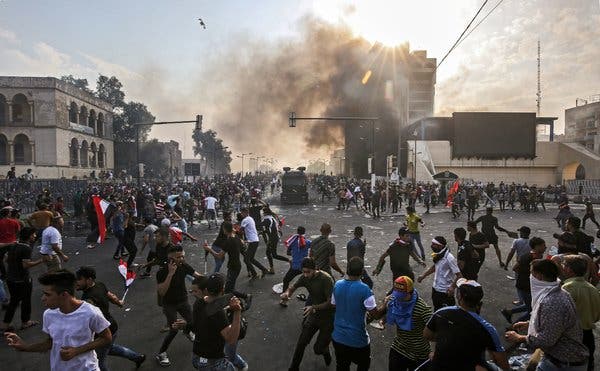 Protests in Iraq and Lebanon over the past few days have raised serious concern among Iranian officials, even more than officials in Baghdad and Beirut. This fact was especially highlighted on Friday and Saturday, November 1st and 2 in Iraq, where protests were far more widespread than ever before.

While Iraq is the second largest oil exporter the Organization of Petroleum Exporting Countries (OPEC), the influence of Iranian-backed Shiite militias in Iraq’s economy sector and their dominance over government projects and the creation of economic empires has led to widespread public discontent.

In Lebanon, groups affiliated with the Iranian regime, such as Hezbollah, have caused tensions in the country, causing corruption and disruption. Therefore, the Lebanese people took to the streets in protest to government corruption and against all groups and the government system. Even in cities that have traditionally been Hezbollah’s center of power, people joined demonstrations and rebelled against the current situation.

The Iranian regime was initially silent and tried to control the protests through its affiliated groups in Iraq and Lebanon. But the power and will of the people did not give up to the demands of the Iranian regime. Now all the officials of Iran have come out in public and are trying to take control of protests.

Initially they used to suppress people, including in Iraq’s Shiite-majority Karbala, where their proxy militias opened fire on protesters and crushed them with vehicles.

In Lebanon, the Amal movement and Hezbollah also attacked protesters at rallies in central Beirut and beat them.

Neither the Iraqi nor the Lebanese government accused any nation state of interfering in their countries and inciting demonstrations. But Ali Khamenei, the Supreme Leader of the Iranian regime, said on March 5 at a gathering of army officer students, the US and Western intelligence services are “setting up riots in the area.”

He added, “I recommend to the sympathizers of Iraq and Lebanon to give priority to the cure of insecurity and respect for the law.”

Hassan Nasrallah, leader of the Hezbollah terrorist group, also accused the demonstrators of being supported from outside Lebanon, prompting the Lebanese people to respond by launching a hashtag titled “I am a supporter of the revolution.”

A few days after anti-government protests began in Iraq, Qassem Suleimani, the commander of Iran’s terrorist Quds Force, traveled to Baghdad by night by helicopter. Suleimani made his secret trip to Baghdad’s heavily guarded Green Zone, and his unplanned visit surprised senior security officials at a meeting in government headquarters.

The secret trip of Suleiman was to deal with the Tehran’s concerns over protests that have swept across the capital, Baghdad.

On October 30, the representative of Iran’s Supreme Leader in the Keyhan, the main conservative newspaper in Iran demanded the “capture” of the U.S. and Israeli embassies in Baghdad.

But Iraqi protestors are well aware that the main source of their problems is Iran, their dissatisfaction and anger with Iran have manifested in many ways.

Protesters in Baghdad set fire to the Iranian flag. The people of Karbala gathered in front of the Iranian Consulate in the city and chanted “Iran out of Iraq”.

They also burned posters and photos of Khamenei and Khomeini, and in response to Hossein Shariatmadari, who demanded the occupation of the US and Israeli embassies, tried to occupy the Iranian embassy. One demonstrator was killed in the effort.

These days, protests in Iraq and Lebanon have become a new challenge for the Iranian regime, the slogan of Iran out of Iraq and Nasrallah get out of Lebanon is a clear message to the Iranian regime that it must disband all its mercenaries and stop interfering in the region. As an Iraqi protester said in response to Khamenei:

Khamenei Take your cronies out of Iraq. Get these Sunni and Shiite games out of your head.