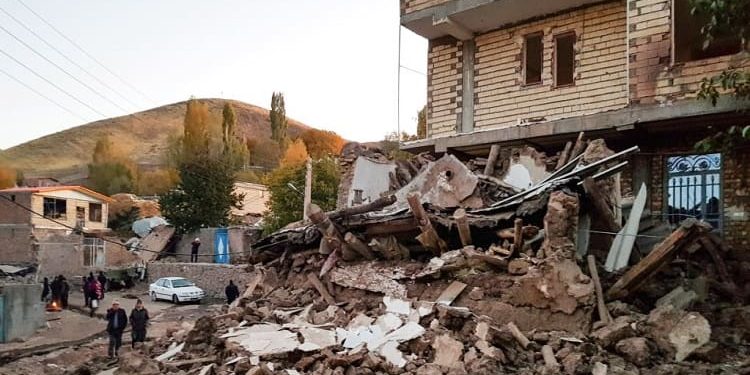 While Iran’s economy is in its worst condition and the mullahs’ regime allocates all the natural resources of the Iranian people to terrorism, assisting terrorist groups in Yemen, Iraq, Lebanon and Palestine, and producing weapons of mass destruction and missiles, the recent earthquake in western Iran doubles the suffering of the Iranian people.

On November 8, earthquake struck the western reaches of Iran, so far killing five and injuring more than 700. The earthquake, which was only 5.9 on the Richter scale, resulted in many deaths and financial losses. The devastation was due to the worn-out buildings that the poor people live in.

There is still insufficient and accurate information on the status of recent earthquakes. But a brief look at the regime’s actions reveals the fact that the mullahs do not think about the suffering of the people. Instead, they seek to steal and repress the people inside Iran, as well as focus on overseas terrorism and threaten the world. As they are now more focused on Iraq, they want to repress the Iraqi people rather than deal with earthquakes in western Iran.

Mustafa Najjar, head of the country’s crisis management organization, said: “In terms of temporary accommodation, we have no choice but to supply tents in earthquake-prone areas, and the provision of a trailer houses is another matter that we do not agree with.” (Etemad online November 18)

Youssef Davoodi, a member of the Majlis, also admitted that despite passing a few days from earthquake, 90% of the affected villages in Sarab have not yet started digging.

He said: Removing earthquake rubbles in villages is very slow and there is need to take action.(Mehr News Agency November19)

People in the area have also repeatedly protested officials ignoring their problems over the past few days, and say they suffer from lack of facilities while the weather is very cold and many people have no shelter.

But the question is; how many more earthquakes should happen in order to secure the villages and cities in Iran against the quakes? How many more innocent people, including children, should be killed so that the national wealth would be used to rebuild and secure the earthquake-prone towns instead of fueling foreign conflicts? The main question is: When will this disarray, which is directly caused by the corruption in the urbanization system, end?

Of course this is only a small sample of the corruption that the regime is plunged in.

After the recent earthquake in Western Iran, Iranian opposition leader Maryam Rajavi on Friday expressed her condolences to the people of Iran over the deadly quake.

“My deep condolences to the survivors of the earthquake in Azerbaijan, Zanjan, Gilan, Ardabil, and wishing for quick recovery of those injured,” Maryam Rajavi said.

“I urge the nation to rush to the aid of the victims of the earthquake.”

“By plundering Iran’s wealth or squandering it in warmongering and anti-patriotic nuclear and missile projects, the mullahs have left the people of Iran defenseless in the face of natural disasters,” Mrs. Rajavi added.

By plundering Iran’s wealth or squandering it in warmongering and anti-patriotic nuclear and missile projects, the mullahs have left the people of Iran defenseless in the face of natural disasters. #Iran

In November 2017, a 7.3-magnitude earthquake struck near the Iranian province of Kermanshah leaving some 830 people dead and 8,100 injured. The regime failed to provide government aid to victims. Two years on, many in the region still live in makeshift homes, such as tents or cars, which contributes to a severe physical and mental health crisis.