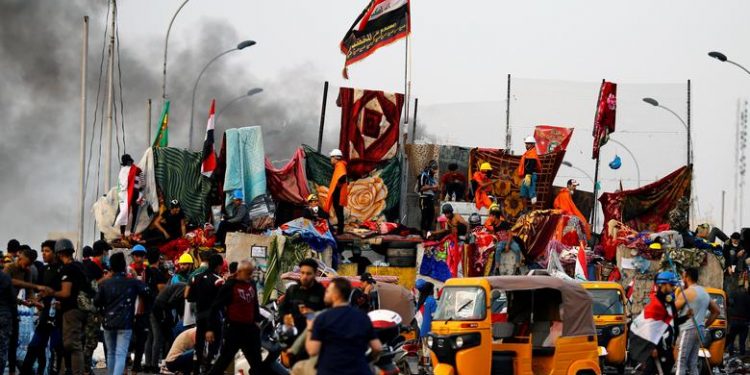 One of the chapters of the ongoing uprisings in Iraq has become known as the “Battle of the Bridges.” This name is due to the strategic importance of bridges conquered by brave Iraqi youths, which continue to defend them despite the brutal suppression of government forces. Nearly a month after the uprising began, Iranian regime supreme leader Ali Khamenei entered the scene directly by sending Quds Force commander Qassim Suleimani to Iraq and ordering his mercenaries to open fire on the defenseless people.

The Iraqi capital is divided into two parts, Rasafa and Karkh, sectioned by the crossing of the Tigris River. Thirteen bridges connect Baghdad’s two divisions. But there are seven main bridges in central Baghdad, connecting the east of the Tigris River to the west, Green Zone. Strictly protected Green Zone hosts government offices and foreign embassies.

The most famous of these is the Jomhoori Bridge, which connects Tahrir Square and the Green Zone. Other bridges, such as al-Sennek, al-Ahrar, al-Shohada, and Bab al-Mu’azam, are among the bridges that have been in the hands of the people so far. During recent days, demonstrators created fortifications on these bridges to fend off cruel attacks by security forces and Iran-backed militias.

The widespread protests, which increase and intensify every day, are the most massive anti-government demonstrations in the history of this country. Events initially started due to vast poverty and the government injustice, but soon afterward, it became a national uprising against the mullahs’ occupying.

In the first week of the demonstration, Iraqi Prime Minister Adel Abdul Mahdi, unable to resist in the face of the uprising, announced his resignation. But since Khamenei was Iraq’s chief ruler, he immediately sent Suleimani to Baghdad, dissuading him from resignation and instead ordering the repression of the people.

But Iraq’s children did not succumb to Suleimani’s demands and threats. Instead, the demonstrators in al-Tahrir Square and the youths who took over the streets of Baghdad’s east continue to hold their positions despite more than 300 martyrs and 1,500 wounded.

In the past few days, the battle of bridges in Iraq reached a new dimensions. Khalani Square in Baghdad, like AL-Tahrir Square, was the scene of a massive assault by government agents and mercenaries of the Iranian regime. They intended to occupy the al-Sennek bridge. In this regard, the security forces frantically attacked the Iraqi youths, using live ammunition and directly firing tear gas. However, the outraged people never gave up and continued the battle. Worthily, the people still hold the bridge despite some of their comrades losing their lives.

Notably, the officials aimed to control the critical bridges like al-Ahrar, al-Shohada, and push protesters back. But their ingenious ingenuity defeated against the people’s determination as the bridges remained in the hands of protesters so far.

So now the battle of bridges in Iraq is a historic battle that the people are continuing against the Iranian regime’s occupation and its affiliated forces.

The Battle of the Bridges in Iraq is a Symbol of love for freedom, human dignity, and resistance to cruelty and corruption against those who serve the interests of the Iranian regime instead of the Iraqi people.