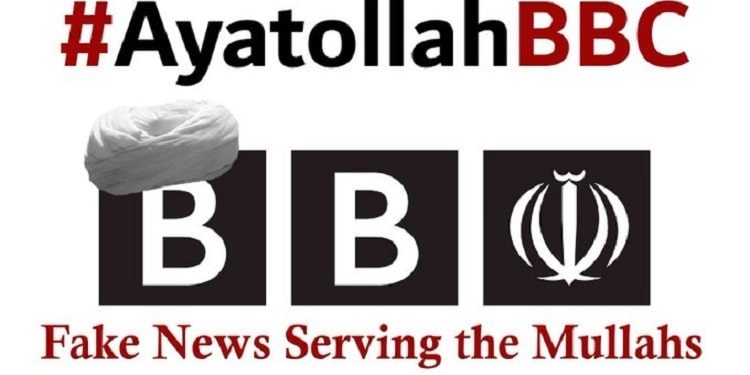 BBC World has committed a great betrayal by censoring the truth about the Iranian people and their suffering over the years under the oppressive rule of the mullahs.

As a result, the Iranian people rightly call BBC World Network “Ayatollah BBC,” and this is a mockery of the broadcasting network’s support for the Iranian mullahs.

Iranians have repeatedly launched internet campaigns with the hashtag of “#AyatollahBBC” and have complained about BBC’s censorship of the regime’s crimes in Iran.

The BBC Persian staff are mostly Iranian-born and in contact with the Iranian regime and Iran’s Ministry of Intelligence and Security (MOIS). They frequently prove their faithful support of the world’s record-holder of execution per capita in various interviews and shows.

Ghazizadeh’s appearance holding the Islamic Republic’s flag indicates that she is sincere in her responsibility to defend the world’s number one state-sponsor of terrorism.

Yes, according to BBC staff and the BBC World Network, the Iranian regime should be encouraged and not blamed for its brutality, robbery, corruption, and the assassination of its opponents. How? By censoring facts and spreading propaganda in favor of the Iranian regime

In another disgusting act, BBC staff ridiculously took a photo with the flag of mullahs to please them instead of reporting the Iranian people’s suffering.

BBC staff hosts and interviews people who publicly support the Iranian regime and its affiliated terrorist groups. Ali Alizadeh, a fervent supporter and advocate of the Revolutionary Guards (IRGC) and Lebanese “Hezbollah,” is among these people invited by BBC. “Since the US has listed the Revolutionary Guards (IRGC) as a terrorist group, I am also an IRGC member,” Ali Alizadeh said in an interview with BBC.

In another image, a BBC correspondent, Rana Rahimpour, is wearing a green dress and a yellow coat in support of Hezbollah Lebanon, which looks like the group’s flag. This while Hezbollah is on the UK terrorist list.

Even U.S. Senators protested BBC’s censorship to support the Iranian regime via by hiding the truth. In this regard, Senator Marco Rubio said,” The Iranian regime is repressive and dangerous and refuses to support a free press. it’s disgraceful BBC would enable Iran’s hostility towards the press. I urge them to reverse this decision and support press freedom.”

It is natural that the BBC and its staff have been campaigning against the MEK and the National Resistance Council of Iran for years in support of the mullahs.

The Iraqi people, despite having come to the streets because of economic problems, have identified the Iranian regime as the main cause of their problems and demanded its eviction from their country.

Like the Iraqi people, the Lebanese see the Iranian regime and its support for Hezbollah as a cause of instability and corruption in Lebanon. In Yemen, the Houthi terrorist group received arms and funds from Iran and has created a humanitarian crisis in Yemen.

In Iran, as we have already mentioned, people are suffering from repression, the execution of young people in public, the suppression of women, and the suppression of teachers and workers is another part of the Iranian regime’s crimes. But the BBC targeted the MEK instead of addressing these issues.

These days, the BBC’s main focus, rather than being on the problems of the Iranian people, is whether MEK members are allowed to think about sex or not?

While the people of Iran are suffering from poverty, the Iranian regime spends huge amounts of the national wealth on propaganda campaigns in foreign media outlets.

The BBC, citing two Iranian regime spies in Tirana, claims that MEK members do not have internet access, while Iranian regime officials, including their ambassador to London, was saying just two weeks ago that the MEK members The Mujahideen propagate against the regime with 1,500 supercomputers round the clock.

Now the question for the BBC is which one of you is right, you or your favorite mullahs in Iran?

In another case BBC accuses MEK of terrorism but makes no mention of hundreds of mullahs’ terrorist operations against the MEK, the latest of them planned in July 2018 by a diplomatic official against the MEK’s annual gathering in Paris. The plot was ultimately foiled by European police.

The BBC and its correspondent appear to be stupid enough to report on the MEK from Albania but make no mention of police disclosure of the Iranian regime’s neutralized plan against the MEK in Albania.

The BBC has reached a point of insolence and mischief in the service of the mullahs that, even in its Persian section, removes all the comments of the Albanian people and the Albanian authorities about their respect for the MEK and published only the parts that please their patrons in Tehran.

A statement from the National Council of Resistance is attached

The BBC’s actions can never prevent the MEK from fighting and resisting because they have been fighting with Iranian regime for 40 years and 30 thousands of them lost their lives within 3 months in a massacre and the BBC doesn’t even mention.

The BBC cannot save the religious dictatorship ruling Iran because under the laws of evolution no dictatorship can continue to be in power forever, and it is the people who will overthrow them in the most difficult way.