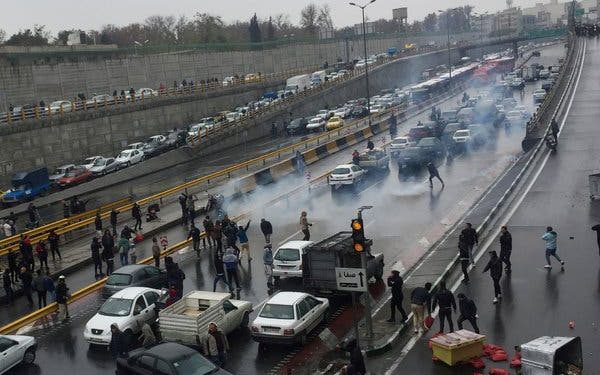 Dozens of cities across Iran are witnessing massive protests in response to a recently imposed gas price hike by the mullahs’ regime. Protesters are targeting the regime in its entirety in their political slogans against Iranian regime Supreme Leader Ali Khamenei, President Hassan Rouhani and the Revolutionary Guards (IRGC) as the source of all their miseries.

The ‘Resistance Units’ of the main Iranian opposition group People’s Mojahedin Organization of Iran (PMOI), also known as the Mujahedin-e-Khalq (MEK), are coordinating much of the protests and sending out footage from the scene.

Ali Khamenei voiced deep concerns on Sunday over the escalating uprising now spreading to 93 cities checkered throughout the country. Protesters have destroyed 101 regime centers in various locations. Security forces have killed at least 27 protesters in clashes with demonstrators.

Linking the recent protests to the Iranian opposition People’s Mojahedin Organization of Iran (PMOI/MEK) he said, “On social media and other platforms they are constantly encouraging people into these protests.” The mullahs’ top figure also backed the regime’s recent decision to increase fuel prices by up to threefold, making it crystal clear the decision has his blessing and there is no intention to listen to the Iranian people’s demands.

In Shiraz, south-central Iran, protesters are continuing their rallies and blocking many roads by torching tires. Various parts of the city are effectively out of the regime’s control.