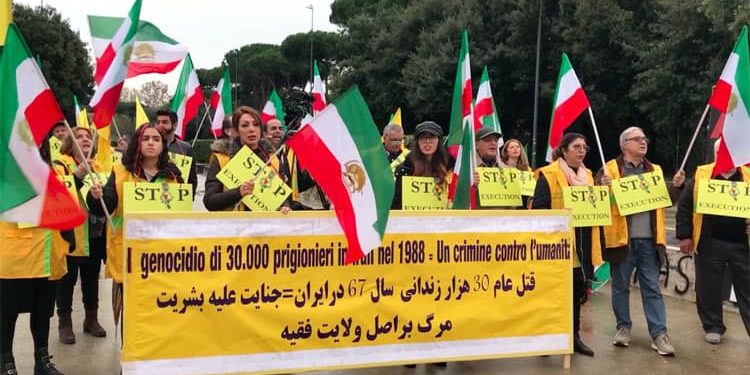 On Sunday, MEK supporters in Europe in various European cities staged rallies in support of the Iranian people’s uprising.

MEK supporters in demonstrated in Trocadero Square, Paris, in support of the Iranian people’s uprising and condemned the regime’s crimes in suppressing the protests and shutting down the Internet. The demonstrators called on the international community to support the people of Iran.

In their slogans, the demonstrators declared their support for the resistance units, the MEK network inside the country.

In Oslo, Norway, MEK and National Council of Resistance supporters rallied in front of the Iranian regime’s embassy and condemned the regime’s crackdown on protesters inside Iran.

They also created a monument in memory of the martyrs of the protests in Iran. They laid flowers at the monument and demanded that the international community to hold the leaders of the mullahs’ regime accountable for crimes against humanity.

Mr. Parviz Khazaee, representative of the National Council of Resistance in the Nordic countries, praised the freedom-loving Iranians for organizing the demonstrations and said, “Thank you for your gathering today in front of this embassy occupied by mullahs. One day, we want to get these criminals out of this embassy and give it to the real representatives of the Iranian people.”

In England, MEK supporters held a demonstration in front of the embassy of the mullahs in support of the people’s uprising. They chanted slogans against the Iranian regime and called on the international community to stand with the Iranian people.

In Amsterdam, the MEK supporters also declared their solidarity of the Iranian people’s uprising, which has spread to more than 100 cities across the country.

In Stockholm, Copenhagen and Borås, Sweden, freedom-loving Iranians and MEK supporters declared their support for the uprising of the Iranian people.

They also demanded the mullahs’ criminal leaders to be held accountable for crimes against humanity, especially the 1988 massacre of political prisoners.

It is worth reminding that the criminal mullahs’ regime increased fuel prices by 50% three days ago, leading to a popular uprising across Iran. At least 30 people have lost their lives in the demonstrations, and hundreds are wounded so far.

The demonstration has spread to more than 100 cities so far and is continuing.