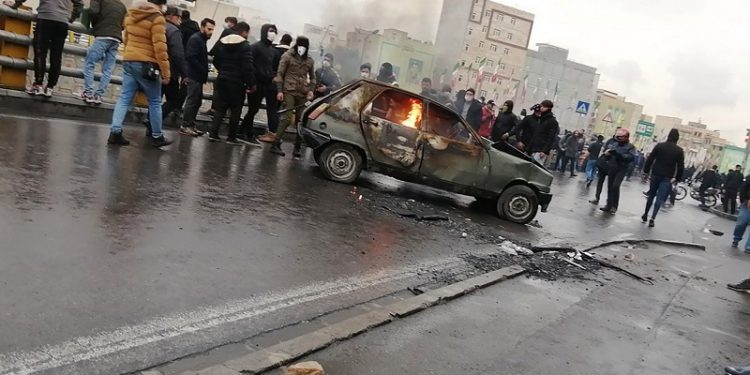 The Revolutionary Guards (IRGC): In just one province 100 banks have been set ablaze.

The Revolutionary Guards admitted in their news agency that the scale of the uprising on Friday and Saturday was widespread compared to the January 2108 uprisings, with more than 100 banks being set on fire by protesters and youth in only one province.

The insurgents were well trained

According to a security agency’s preliminary estimates of the level of protests over gas prices in recent days, the protests are widespread and organized violence. security forces sent a warning message to many protesters.

The core function of the violence shows that these individuals were fully trained and unlike many people who were surprised by the sudden gas price hike, these people were ready for this situation.

The level of violence and the protesters’ destruction were wider and more destructive than the January 2018 rallies. As a result, there has been an increase in the number of deaths and financial damages.

Most of the public property damaged has been in Khuzestan, Greater Tehran, Fars and Kerman provinces.

The exact number of casualties are not available, but most of them have come from attacks on oil depots and military bases. So far, about 1,000 people have been arrested in recent unrest across the country, and more than 100 banks and 57 big stores have been set on fire in just one province … “.

Radio conversations by suppressive state-security forces from Robat Karim with IRGC brigadier Rahimi, the commander of the police force in Greater Tehran:

“5000 people are moving toward the governorate, it will collapse if you act late!”

Internet is severely shut down and the mullahs’ regime is tolerating the financial loss of nearly $370 million dollars each day that the internet is blocked, according to netblocks.org

Last night in the town of Fardis near Karaj, over two thousand people protesting in the main square were able to take control over the area. All the youth were defending their ranks against the regime’s forces, especially confronting anti-riot units and plainclothes agents. Protests and gatherings are intensifying in this area and many of the regime’s administrative offices have been torched.

The Iranian society is in a volatile state and despite massive repression, protests and demonstrations have been continuing in different parts of the country.

These developments, coupled with the popular movements in Iraq and Lebanon, further undermine the status of the regime.

PMOI/MEK’s spokesperson hailed the Iranian people rising today and honored the memory of those who have lost their lives in this latest nationwide uprising. The ground is shaking under the feet of the mullahs and IRGC thugs from Beirut to Baghdad, and now in Tehran and all over Iran, the PMOI spokesperson added.

NCRI supporters across the World echo the voice of Iranian protests