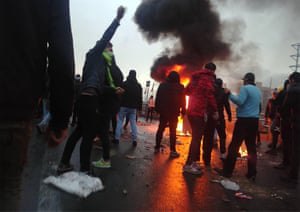 more than 3000 have been arrested during uprising in Iran

Since last Friday, the people of Iran have been protesting and holding anti-government demonstrations the whole way across the country. The protests were sparked by the regime’s announcement that fuel prices would be increased by 50 per cent.

The protests have turned violent, with anti-riot police and suppressive forces attacking the crowds. There have been a number of deaths and many people have been injured because of the violence.

During the weekend, the US Secretary of State posted a message on Twitter reminding the people of Iran that the United States is standing behind them.

The US State Department condemned the regime’s internet and cell phone shut down. A State Department spokesperson said that the people of Iran should be allowed to speak. The statement said: “The U.S. stands with the long-suffering Iranian people as they protest the latest injustice by the corrupt regime in power.”

Yesterday, the German Chancellor spoke about the uprising in Iran, confirming that the country’s government has been very concerned about the events that have been unfolding in Iran. Ulrike Demmer, a spokesperson for Chancellor Angela Merkel said: “It is legitimate and deserving of our respect when people courageously air their economic and political grievances, as is currently happening in Iran.”

During the press conference, the German spokesperson reiterated that the government of Iran should be responding to the current uprising “with a willingness to engage in dialogue”. She said that Berlin urges the Iranian government to “respect freedom of assembly and expression”.

The US Ambassador to Germany highlighted that the United States and the EU could take measures to counter the internet shutdown. Ambassador Richard Grenell said: “We have the technical ability to turn the internet on for the people of Iran. And ensure it is free of government blockers. Europe and America should do it together.”

The National Council of Resistance of Iran (NCRI), the main opposition to the Iranian regime, has said that there have been at least 200 protesters killed since the uprising started on Friday. Furthermore, the notorious Islamic Revolutionary Guard Corps (IRGC) has said that more one thousand Iranians have been arrested, but it is expected that the number is far higher.

Amnesty International believes that the real death toll may be much higher, with some reports suggesting as many as 200 have been killed.

The President-elect of the NCRI Mrs. Maryam Rajavi has called on the United Nations to brief the UN Security Council regarding the atrocities that are taking place, especially considering the high number of deaths and arrests.

The role of the Resistance and protesters in Iran’s uprising