MEK supporters in Berlin rally in support of protests in Iran 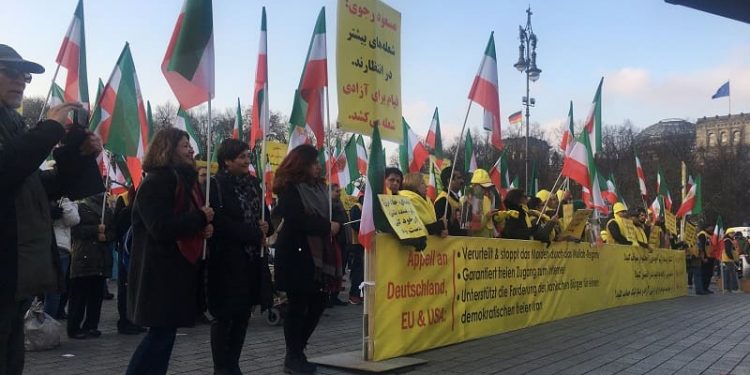 MEK supporters in Berlin rally in support of protests in Iran

On Saturday, November 23, MEK supporters in Berlin held a rally in support and solidarity with protests in Iran.

MEK supporters in Berlin, while condemning the Iranian regime’s brutal use of force against peacefully protesters in Iran , called on the international community to take action to save the lives of thousands of detained protesters who face execution.

MEK supporters in Berlin called on the European Union and the United Nations to support demands of Iranian people and condemn the brutal use of force by the regime against the demonstrators and also called for availability of free internet for Iranian people.

MEK supporters in Berlin called on the German federal government to put pressure on the Tehran regime to unconditional release of all detained protesters and to allow an impartial investigation into the above-mentioned deaths and motives for the arrests of demonstrations.

MEK supporters in Belin also called on the German federal government to put pressure on the Iranian regime to respect the right to freedom of expression and the right of assembly in accordance with the provisions of the UN International Covenant on Civil and Political Rights as a party to the Covenant.

Berlin’s Charlottenburg district’s deputy mayor Detlef Wagner was among those who spoke to the crowd in Berlin.

More about protests in Iran

According to the People’s Mojahedin Organization of Iran (PMOI/MEK)  at least 285 protesters have been killed and 3500 wounded and more than 7000 people arrested by the religious dictatorship ruling Iran during the nationwide uprising.