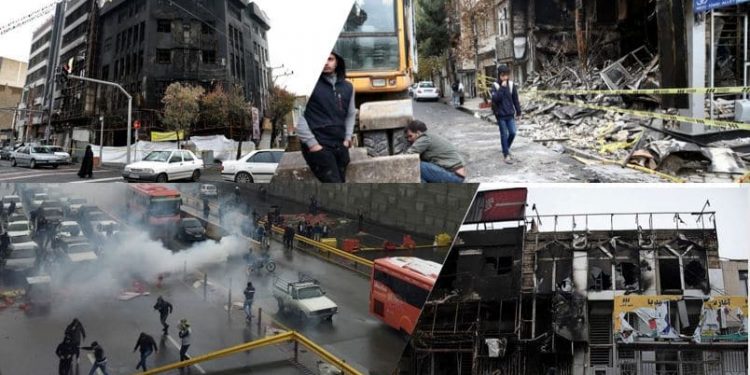 The Iranian regime always spoke of its strategic depth, claiming that Iran’s borders have reached the Mediterranean.

The mullahs viewed Iraq, Syria, Lebanon, Gaza and even Yemen as their strategic depth, or to put it mildly, a part of their sovereignty.

During the Iran-Iraq war, the mullahs also repeatedly chanted “Jerusalem through Karbala” means, they must occupy Karbala first and then have access to the Jerusalem

When the mullahs speak of strategic depth, of course, they mean occupation, aggression and expansionism in the Arab countries and building of a fundamentalist empire. As Mahmoud Ahmadinejad, the former president of the mullahs, said, “We want to manage the world.”

Supreme Leader Ali Khamenei has repeatedly said, “If we do not fight in Damascus we must fight in Tehran, Hamedan and Kermanshah (three cities in Iran).”

“If the enemy invades us and wants to capture Syria or Khuzestan, the first priority is to keep Syria because Syria is the thirty-fifth province and a strategic one for us,” said another mullah, Mehdi Taeb, on February 14, 2013.

But these days, things have changed, and the Iranian regime no longer speaks of strategic depth. It has long abandoned talks about conquering Jerusalem through Karbala. Instead, Khamenei has been warning of the country’s security situation on several occasions.

What is the reason? Initially the motto of the demonstrators in Iraq and Lebanon was to overthrow the corrupt authorities and change the economic situation. But gradually the protests turned against corrupt leaders and groups affiliated with the Iranian regime.

People in Karbala, through which the mullahs’ regime sought to reach Jerusalem, repeatedly attacked the regime’s consulate and demanded the expulsion of the regime and its affiliates

In Najaf, in addition to slogans against the Iranian regime, pictures of regime leaders were set on fire. The names of streets that were named after regime founder Ruhollah Khomeini were changed.

But most importantly, the recent demonstrations by the Iranian people came as a surprise to the regime, and as the regime sought to suppress the uprising in Iraq, it plunged into a new crisis.

Now as the popular uprising both inside the fort and in the strategic depth of the Iranian regime flows, Ali Khamenei, calls the popular movements in Iraq and Lebanon and Iran protests a ploy by enemies, especially the US. But he is well aware that a new era has begun and that the beginning of the end of his regime is well visible.

It is good to take a look at some of the comments made by commanders of the IRGC and Basij forces to clarify why we say the beginning of the end of the Iranian regime has appeared.

Brigadier General Salar Abnoush, Operation Commander of Basij, on Thursday; November 21, describes recent protests in Iran as “outright world war” that “suddenly swept across the country.” He insisted, “Only God saved us”

Ali Fadawi, the deputy commander in chief of the IRGC, likened recent protests in Iran to Operation “Karbala 4”.

(The details of the Karbala4 Operations, launched by Iran during the Iran-Iraq War in January 1986, Leaked and resulted in the worst military defeat in the country.)

Mullahs are losing sleep over the Iran protests and they are now most concerned about maintaining their sovereignty in Iran. Although they continue to spend Iranian people’s funds on their groups in Lebanon, Yemen, Iraq and Syria but they are no longer thinking of strategic depth but are trying to somehow control the critical situation after Iran protests.

Now, the Iranian people have gone through an important stage. They have witnessed the most brutal repression, killing and censorship over the past week, therefore, their determination to overthrow the mullahs likely increased and we will see new developments soon.