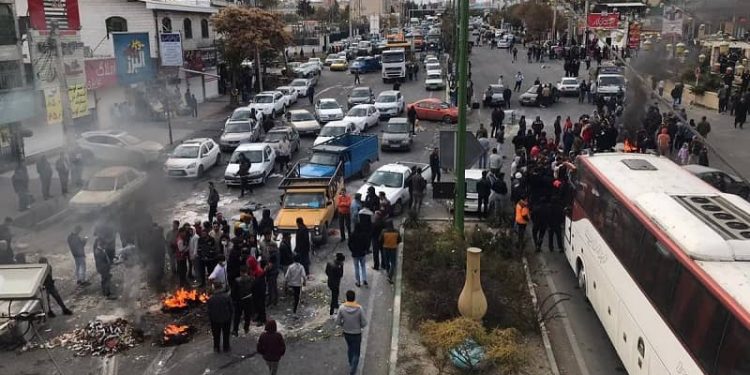 The Iranian regime has lost control. The people of Iran have been on the streets holding anti-government demonstrations and protests the whole way across the country for more than 10 consecutive days. The uprising is very significant and it presents a very real threat to the regime’s survival.

However, despite recognising that the protests are significant, it has tried to appear in control of the situation. The regime said over the weekend that the police, local law enforcement and security forces in the city of Shiraz have been able to take control and bring calm back.

A few days previous to this, Rear Admiral Ali Fadavi, deputy commander of the country’s Islamic Revolutionary Guard Corps (IRGC), spoke about the violence on the part of the regime. He mentioned that scene in some cities was like scenes from the Karbala-4 operation during the Iran-Iraq war. He said that in some cities, “we seriously fought for 48 hours straight”.

This is a typical response for the regime – to respond with criminal brutality. The people have been denied their right to freedom of speech and freedom to peacefully protest.

Many officials in Iran, especially IRGC commanders, have spoken about the coordination of the protests across the country. Brigadier General Salar Abnoush, the operations commander for the IRGC’s notoriously brutal Bassij forces, said that the coordination of the people has been “extraordinary”. He also mentioned that the people have been simmering with discontent and all it was going to take was one small thing for the situation to get out of hand. He said the people “were only waiting for a spark in order to destroy the country”.

Brigadier General Salar Abnoush also admitted that the regime shut down internet access in an attempt to get a grip on the situation, but said that it was left too late. “There was a delay in shutting down the internet but still it helped to disrupt the sophisticated organization of these groups. … This was a different kind of sedition. … As someone who was present on the scene, I believe that only God saved us.”

It appears that the current uprising is much more significant than previous ones, even those of 2009 and 2018-2019 when the people were met with a deafening silence from much of the rest of the world.

The people, supported by the PMOI / MEK, the main opposition to the Iranian regime, are calling for great change via regime change. They want to finally be granted rights that will be respected by their leadership and they want democracy and equality. After decades of repression and suppression, the people of Iran are adamant that they will be the force behind regime change.

Young people and women have been at the forefront of these protests. All sectors of society have joined together and there is a massive sense of unity as the people take to the streets with the same goal. The courage of the people is remarkable as they are literally risking their lives for this cause. Let’s hope the international community recognises this very unfair fight.