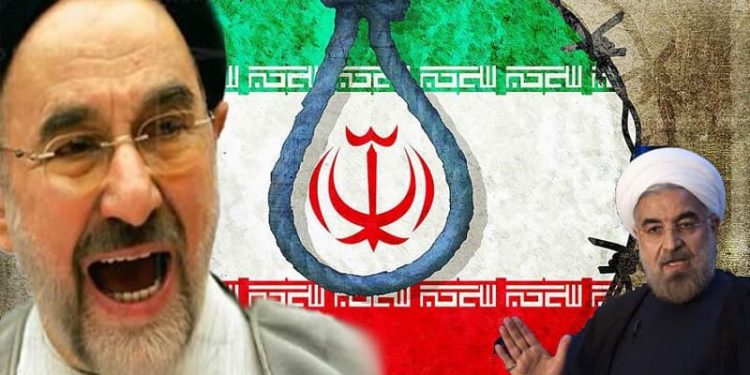 Iranian protesters in 2018 and 2019, in a nutshell, said “NO” to the mullahs and demanded a complete regime change.

For years, the dream of reforming the mullahs’ regime has been on the table of Western states. Also, within the mullahs’ rule, some people such as former President Mohammad Khatami and current Iranian President Hassan Rouhani, posed as reformists to deceive both the Iranian society that dreamed of freedom and Western countries. The aim was to extend the life of the mullahs’ regime.

During Mohammad Khatami’s rule, Western countries turned a blind eye to human rights abuses in Iran. The United States also forgot the Iranian regime slogan, “Down with the US,” and the seizing its embassy and taking its diplomats hostage. Instead it decided to show good will to the mullahs in Tehran. This set the stage for the US to designate the main opposition of the Iranian regime, the MEK, as a terrorist organization.

In 2003, the United States also aided the Iranian regime by bombing MEK members in Iraq. France also did a favor to the mullahs by arresting Mrs. Maryam Rajavi and attacking MEK bases so that the dream of reform might come true within the mullahs. But they didn’t get anything.

Years later, US National Security Advisor Condoleezza Rice asserted “we’ve been searching for that 25 years and it doesn’t ever seem to work” , thus acknowledging the failure of this dream.

Mr. Masoud Rajavi, the leader of the Iranian resistance, announced that “viper does not give birth to pigeon” when Khatami rose to presidency, which means that the mullahs will not be reformed from within.

Hassan Rouhani, the regime’s current president, has been representing supreme leader Ali Khamenei in the Supreme National Security Council for 23 years. He was secretary of that Council for 16 years and was involved in many terrorist decisions and repression of the Iranian people and covert nuclear activities. So how can we call him a “reformist” within the context of what is commonly referred to as “reformist”?

Mohammad Khatami also served as propaganda minister under Ruhollah Khomeini, former Iranian supreme leader. He punished thousands of journalists, and he confessed to forcing hundreds of thousands of young children into minefields and using them as cannon fodder. During the same period, more than 30,000 political prisoners were slaughtered by the regime.

Mohammad Khatami is the authority who ordered the suppression of students during the Iran protests at Tehran University in 1999. Therefore, he and his accomplices who are involved in the killing of the Iranian people and cannot be called reformists. So, reform of a system based on the killing and violation of human rights and the spread of terrorism and war cannot be expected.

In Europe, of course, there are now a few, hoping for a reform within the mullahs’ regime. Most Western media and politicians have now come to believe that the mullahs are incorrigible. Only a few, for the sake of economic gain, like to deceive a part of society and try to create a rosy picture of the mullahs’ regime.

In the US, too, all politicians know it well as Mrs. Rice said, “There will not be any moderate in the mullahs’ regime.” There are only a few media outlets or “friend reporters” that the Iranian regime fooled them, and they think the mullahs can be reformed.

Two weeks after that Iranian protesters purred into the streets and the mullahs cut off the Internet and killed Iranian protesters behind closed doors, images of Iran protests have been released to the world. All those who wanted to deceive themselves and seek a mirage of reformation are no longer hopeful of reforming this regime.

Usually, no insect will pick the scorpion as neighbor because otherwise, it will have to wait for its agonizing venom. So, if anyone in this situation is still looking for a mirage of reformation and nurturing this dream in his head, it is the same as living in the scorpion’s neighborhood because the mullahs will not be loyal to anyone.

We can see an instance of the in the way the mullahs treated their European friends only in 2018 and 2019. The good relations of the European countries, especially France, with the Iranian regime have yielded nothing but the expansion of terrorism in Europe.

The Iranian regime’s terrorist operation in past two years

In the Netherlands, Iranian regime agents assassinated an Iranian, and the Netherlands was forced to expel an Iranian diplomat. Albania also expelled the ambassador and the first secretary of the Iranian embassy.

In conclusion, we must stress again that “the viper does not give birth to pigeon,” and we should not seek to find a moderate within the Iranian regime. Many of those who were part of the mullahs’ governmental system and claiming reformism now say that there will be no real reform in Iran.

Therefore, it is necessary to emphasize that it is essential to stand with the Iranian people and support their demands for the establishment of a democratic government that respects the rights of the people. The West must support this demand of the Iranian protesters.

The danger of religious fundamentalism originating from the Iranian mullahs has become a global threat.

The West must rush to the aid of the Iranian protesters to cut off the head of the snake in Tehran.