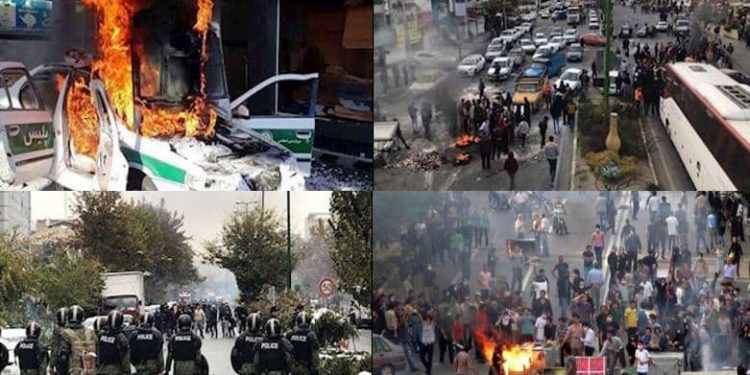 The people of Iran have been participating in widespread protests across the country. It all started on Friday 15th November as a reaction to the government’s announcement that petrol prices would be greatly increased – a major blow to the people of Iran who are getting poorer and poorer because of the regime’s mismanagement and profound corruption.

The country’s interior minister, Abdolreza Rahmani-Fazli has tried to downplay the situation. During an interview on television, the interior minister admitted that the People’s Mojahedin Organization of Iran (PMOI) / Mujahedin-e-Khalq (MEK) has been behind most of the protests. He also admitted that the people have been calling for regime change. However, in an effort to downplay the situation, Rahmani-Fazli said that between 130,000 and 200,000 Iranians have participated in the demonstrations. This is a gross understatement considering that protests have been taking place across the whole country.

The Iranian regime has traditionally denied that the opposition is much of a threat. It has tried to dismiss it as a movement with very little following in the country. However, the opposite is true. Over the past four decades, the MEK / PMOI has grown larger in numbers and in support and it has become the biggest threat to the regime’s existence.

Yet, in recent years, the regime has been unable to deny the threat the opposition poses. In fact, even back in the eighties the regime knew just exactly how legitimate the PMOI / MEK is. The Supreme Leader at the time, during the summer of 1988, ordered the execution of all political prisoners that refused to denounce the PMOI / MEK. More than 30,000 political prisoners were executed during this one incident alone, and since then the regime has continued to crack down on political opponents.

Despite this, the interior minister in his interview just a few days ago said that there were up to 200,000 people participating in the uprising. The regime is ridiculously still trying to give the impression that it is in control of the situation.

Although there has been an internet and cell phone shut down and there have been difficulties with communication, the National Council of Resistance of Iran (NCRI) maintains that this only represents a fraction of the real extent of the uprising. Furthermore, if there were only small numbers of people demonstrating, why would the regime go to such an extreme to cut the internet?

The upheaval in the country is significant and the sheer number of deaths and injured people is shocking. Furthermore, the fact that thousands of protesters have been arrested is very concerning.

President-elect of the NCRI Mrs. Maryam Rajavi has called on the United Nations Secretary General to ensure that a delegation is sent to the country as soon as possible to assess the situation and to protect the people that are simply exercising their right to protest and calling for peace, freedom, democracy, the respect of human rights and equality. She also calls on the international community to speak out in support of the people of Iran.