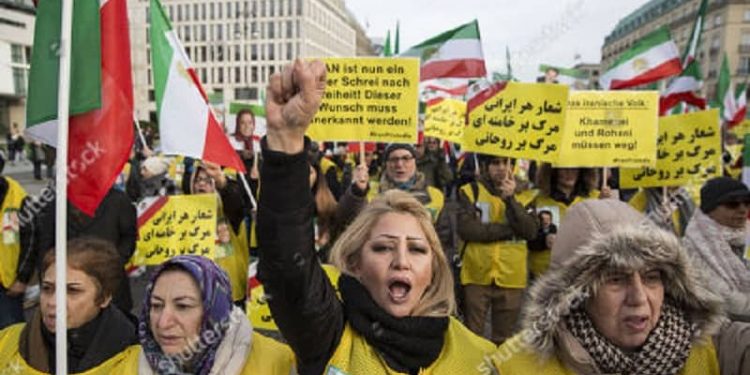 The Anglo-Iranian Communities in the UK and supporters of the Iranian Resistance (NCRI) will hold a rally opposite Number 10 Downing Street on Saturday, November 30, in support of the Iranian people’s uprising againstthe clerical regime.

Members of the House of Lords, renowned human rights advocates and representatives of various Anglo-Iranian Associations will also address the rally.

The major protests over rising fuel prices in Iran that began on November 15 spread to over 176 cities in all of Iran’s provinces with slogans targeting the entire clerical regime and has today turned into an ongoing nationwide uprising for genuine democratic change.

Over 450 protesters have been shot and killed, 4000 wounded, on the streets and over 10,000 have been arrested, according to the reports by Resistance Units and the social network of the Iranian opposition PMOI/MEK, in Iran

Mrs. Maryam Rajavi, the President-elect of the National Council of Resistance of Iran (NCRI), praised the brave people of Iran and the youths who took part in the uprising and said: “The clerical regime is making all its efforts and using all its means to conceal the actual death tolls. The United Nations must immediately dispatch investigative missions to Iran to evaluate the number of those killed, injured and imprisoned.”

The rally will urge the UK Government to strongly condemn the clerical regime’s brutal crackdown on the protesters and to express support for the Iranian people’s uprising for the establishment of democracy.

Participants highlight the call by the NCRI President-elect and urge the UK Government to work with the international community and its allies for concrete actions to hold the clerical regime and its leaders to account for the brutal crackdown and to put maximum pressure on the regime to immediately halt the killings and mass arrests of protesters as well as immediately release those arrested during the uprising.

Demonstration and march of solidarity with the Iranian people’s nationwide uprising, Call to stop the massacre