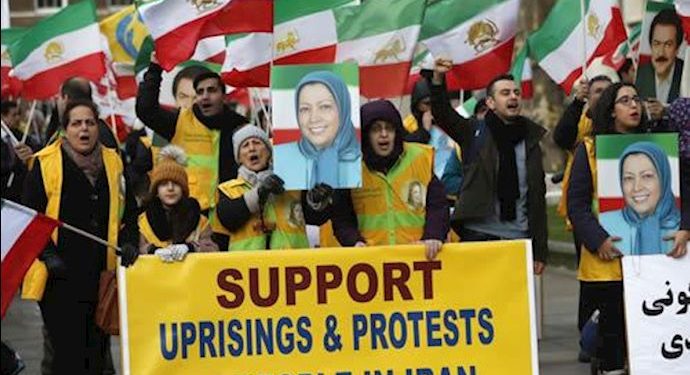 Iranians, supporters of the People’s Mojahedin Organization of Iran (PMOI/MEK) in Oslo, Norway, held a protest in solidarity with the Iranian people’s ongoing uprising and the MEK’s resistance units. The protest was simultaneous with other protests in dozens of cities in Europe, United States, Australia and Canada.

Some of the Norwegian parliamentarians also participated in this rally and expressed their support for Iran protests.

Mr. Pierre Ide, Norwegian MP from the Socialist Party, spoke at this rally. “I assure you, that when I support you and your struggle, I have my entire party behind me. Your perseverance and determination in continuing your activities on streets of Oslo amaze me. What is going on in Iran now convinces me that regime change is in reach. Because the entire Iranian society are against this regime,” he said.

In addition, two other Norwegian MPs sent their message of support of the Iranian people’s uprising and the rally in Oslo.

Mr. Christian Gjedde, member of the Norwegian Parliament’s committee of foreign affairs, in a message said, “I stand with you in your struggle against the terrorist regime in Iran. The organized and institutionalized discrimination and violence against women shows the Iranian regime’s real face. My party and I support the efforts made by the National Council of Resistance of Iran [NCRI] to establish democracy, freedom and gender equality in Iran. I also say we want a democratic and secular government in Iran.”

Ms. Ingjerd Schou, Norwegian MP from the conservative party and member of the Defense and Foreign Affairs committee sent a message to the rally in Oslo and expressed her support of the nationwide uprising in Iran. “I would like to express my solidarity with all the women who are subjected to oppression, violence and threatened; and are deprived from freedom. When a society fails to provide liberty for women, denies the right of half of its population. This is unacceptable. If we want to move forward everyone should express their support and solidarity with the resistance,” she wrote.

A woman, who participated in the rally of Oslo, while referring to the role of MEK’s women in the struggle against the mullahs’ regime and its effectiveness, said, “The long struggle of the MEK female members to achieve freedom for their people and country, their glorious resistance in Iraq against the regime’s mercenaries for 14 years in Camps Ashraf and Liberty, inspires all the women and girls inside Iran.”

Supporters of the NCRI and the MEK rallied in solidarity with the recent uprising in Iran.

Elizabetha Zamparotti, supported the protesters in Iran and said, “What happens in Iran is not a mere protest, it is the Iranian people’s rebellion against suppression. Despite the internet and social media blackout we are aware of what is going on in Iran. Thousands of brave Iranians relayed the news of killings of hundreds and thousands of injuries.”

She also slammed the appeasement policy and said, “The appeasement policy vis-à-vis the Iranian regime should end. The First sign of this is recognizing the resistance movement against the Iranian regime. This regime has only one face, which is brutality and systematic human rights violations of the regime’s supreme leader, Ali Khamenei, and other authorities. This regime destabilizes the region.”

Mr. Reza Olya, member of the NCRI also said, “I would like to admire those brave men and women struggling for freedom in Iran. They are risking lives and take to streets to challenge the mullahs’ regime and its thugs. We urge all the democratic governments to support the Iranian people and their righteous demands. We will echo the voice of the Iranian people in every corner of the world.”