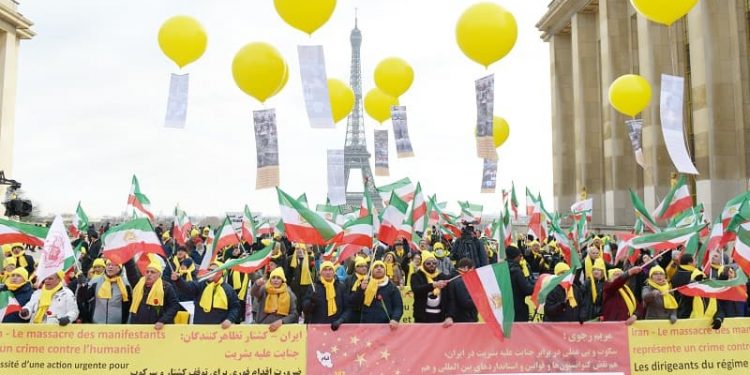 In recent days, supporters of the MEK have held various rallies in European cities in support of the Iranian uprising and have called call for an international probe into the crimes of the Iranian regime against Iranian protesters.

On Monday, Iranian Resistance supporters in Paris, in a rally, announced their solidarity with the uprising of the Iranian people to overthrow the mullahs’ regime. They also demanded the assembly of an international investigation delegation to visit Iranian prisons and prevent the massacres of thousands of protesters who have been arrested in the past weeks.

Mrs. Maryam Rajavi, president-elect of the National Council of Resistance of Iran (NCRI), sent a message to the Iranian Resistance supporters who demonstrated in Paris and said:

“The blood of over 600 rebellious youths, the cries of 12,000 arrested youths detained in Khamenei’s torture chambers, and the cries of a rebellious nation from across Iran call on the world to stand up to the religious fascism.
“They cry out: We shook the earth underneath the decadent rule of the mullahs in 187 cities.
“They say: We paid a heavy price to prove that there remain no other options but to overthrow the mullahs.”

Mrs. Rajavi highlighted, “The international community faces a great test to stand by the people of Iran and the Iran uprising, and to condemn the carnage and crimes against humanity committed during the crackdown on the uprising of an arisen nation.”

Describing the prospects for Iran, the Iranian opposition leader said: “This uprising is durable and the regime is not able to contain the protests and prevent the rising of rebellious cities, the resistance units and the great Liberation Army.
“This uprising will carry on until it overthrows the entire clerical regime; this uprising will continue until freedom and popular sovereignty are established in Iran.”

Maryam Rajavi called on the EU to “stop its appeasement of the clerical regime.”

“No concessions should be granted to a regime that slaughters protesters and breaches its commitments to the JCPOA, one after the other. The EU must pull the trigger of UN Security Council sanctions against this barbaric dictatorship which is a threat to global and regional peace and security.
“For their massive suppression and bloodshed, the UN Security Council must declare the Iranian regime leaders as criminals committing crimes against humanity and hold them accountable.
“We urge France to lead a European initiative to dispatch an international fact-finding mission to Khamenei’s torture chambers.

Representatives of the French parliament, a delegation of mayors of different arrondissements of Paris and French politicians, representatives of human rights organizations, human rights activists and women’s rights from all over France addressed the demonstration and expressed their support for the goals of the demonstrations and the demand of the Iranian people to establish democracy.

The Iranian Resistance supporters in Paris held pictures of the uprisings and the Iranian flag, marching through the central streets of Paris while chanting slogans in support of Iran’s protesters.

Iranian Resistance supporters in Paris stressed that the November 2019 uprising made it clear that there are no moderates in Iran. In this regard, Hassan Rouhani, the president of the mullahs’ regime, saluted the repressive forces who killed the defenseless demonstrators and said, “I am humbled by their efforts.”

Supporters of the MEK and the National Council of Resistance in Paris emphasized, “The killing of demonstrators is a crime against humanity. The mullahs’ regime must be prosecuted for this crime.” Silence and inaction in face of crimes against humanity encourage mullahs to continue the slaughter of the Iranian people.

According to the network affiliated with the People’s Mojahedin Organization of Iran (PMOI), also known as the Mujahedin-e Khalq or MEK, inside the country, the Iranian regime has reportedly killed more than 600 people during the uprising so far, wounded more than 4,000 and arrested more than 12,000. Besides, the regime is still maintaining the internet blackout in many areas.

Amnesty International said in its latest report that at least 161 demonstrators were killed by the mullahs’ regime. Victims include teenagers aged 10 to 14 years.

The head of the Mullahs’ National Security and Foreign Policy Commission acknowledged that at least 7,000 demonstrators had been arrested. Hossein Naqavi, a spokesman for the commission, said on November 25 quoting representatives of the Ministry of Intelligence: “For the past two years, the [MEK] has trained various groups and circles and led them in the protests … These events will not be the last and may not be witnesses and we might see similar things.

Footage in Social Media show that the Iranian regime has even turned girls’ schools into temporary prisons and detention centers.

Governor of Quds City: I told security forces to shoot anyone who entered through the door of the governorate 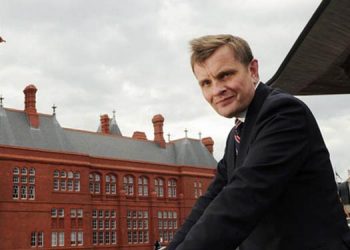 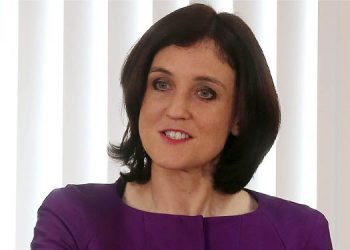