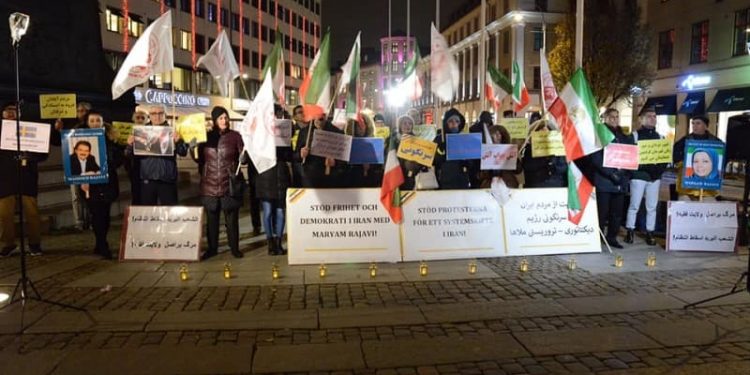 On October 30, Iranians abroad and MEK supporters in many European countries and Canada held demonstrations in support of the Iranian people.

Iranians abroad and MEK supporters condemned the regime’s crimes in Iran and the suppression of recent demonstrations that resulted in more than 600 deaths, 4,000 injured and 12,000 arrests, prompting international investigation into the crime.

In these uprising, people shook the ground under the feet of the supreme leader and his criminal guards, crushing thousands of centers of repression. Yes, hail to those 450 revolutionary heroes and tulips whose hearts were hit by bloody enemy bullets to beat Iran’s heart.

Dr. Matthew Offord, member of UK parliament, supported the cause of human rights and democracy in Iran, he sent a message of solidarity with Iran protests and strongly condemned the bloody repression by the mullahs’ regime. He also urged the UK Foreign Office to take action.

Supporters of MEK and the National Council of Resistance of Iran also demonstrated on the same day in Rome, Italy, calling on the international community to support Iranian demonstrators and condemn the mullahs’ crimes as a record-holder of execution in the world.

Holding placards and banners in condemnation of the mullahs’ brutality, they demanded the immediate release of political prisoners and the people arrested during the recent uprising.

In the demonstration, a number of Italian personalities and Iranians gave speeches and expressed their support for the uprising.

On Saturday, November 30, freedom-loving Iranians and supporters of the MEK and the National Council of Resistance of Iran also held a rally at Sergel Square in Stockholm, Sweden. Despite the cold weather, the demonstrators stood there to voice their support for Iranian protesters and defended their rights.

Demonstrators in Sweden condemned the crackdown on the protesters and demanded the Swedish government to take a strong stance and condemn human rights abuses, including the killing of demonstrators by the Iranian Revolutionary Guards and repressive forces.

They also backed the resistance units and the MEK network inside the country and saw them as the only strategy to respond to the regime to achieve freedom and democracy.

A number of prominent figures, including parliamentarians, spoke in support of the Iranian people’s uprising and condemned the mullahs’ criminal acts.

On November 28, supporters of the MEK and the National Council of Resistance held a photo exhibition in Stockholm commemorating the memory of political prisoners and the 1988 massacres and called on the UN to hold the perpetrators accountable.

Azar, a participant in this exhibition said: “From here, I salute the resistance units and martyrs of the recent uprising in Iran that will not stop and continue till the overthrow this regime. The regime must know that the people will not come short and sit quietly until they overthrow the mullahs. I am very proud of these rebellious youth who are rising in Iran and do everything I can for them.”

Another Iranian woman said: “I attended the exhibition commemorating the 1988 massacres, my uncle also was one of those massacred. I salute the political prisoners who are currently under the most severe torture in the country, and I also support the resistance units and the uprising of the Iranian people.”

Another Iranian who participated in the exhibition said: “I salute all rebellious men and women who fought with this regime these days and weeks and taught the mullahs a lesson. I salute the 450 martyrs who sacrificed their lives in this way, as well as the 120,000 martyrs who did not bow before this regime.

“I am proud of all Iranian youth. We Iranians abroad are working hard to support you in every way possible and we will continue to fight this war until the liberation of Iran.”

Supporters of the MEK and the National Council of Resistance in Norway also support the Iranian people and protesters during a demonstration in front of the Norwegian Parliament in Oslo.

In their demonstrations, they declared that silence and inaction against the killing of four hundred and fifty Iranian youths, four thousand wounded and ten thousand arrests, is treason to humanity and complicity with criminal mullahs.

They also stated that the massacre of four hundred and fifty young Iranians should be condemned promptly by the Norwegian government, democratic states and the United Nations and a fact-finding mission should be sent to Iran as soon as possible.

On Saturday, November 30, the city of Berlin also witnessed the demonstrations of MEK and the National Council of Resistance supporters in Berlin.

They condemned the killing of 450 people by the mullahs’ regime. They also supported popular demonstrations to overthrow the mullahs and achieve democracy. Iranians in Berlin called on the German government, the European Union and the US to condemn the crimes of the mullahs’ regime. The MEK supporters also demanded that the Iranian people should have free access to the Internet.

A number of German personalities took part in the demonstration and delivered speeches.

Mr. Leo Datsen Berg, a former member of the Christian Democratic faction in the Federal Assembly, in his speech at the rally, criticized the inaction of European nations, saying that the uprising of the Iranian people deserved full support from the European Union and the German government should take the initiative to protect those who were arrested in the resent protests in Iran.

Mr. Christian Seimer Mann, head of the Human Rights and Minorities Group in Berlin, also stressed that the mullahs’ regime is not capable of ending the uprising. It is a widespread and popular uprising, people demand radical change and an end to the mullahs’ dictatorship, this is a perfectly legitimate demand and Europe must fully support this demand.

An exhibition of pictures of the uprising and martyrs of Iran protests was held at the demonstration and a number of MEK supporters gave speech in support of the protestors and resistance units.

Supporters of MEK and the National Council of Resistance turned Toronto’s cold weather to a hot day on Saturday, November 30. They made their impact on the streets of the city with their slogans, raising placards and pictures of the martyrs in support of the uprising of the Iranian people.

In support of the Iranian uprising, they called for the immediate release of those who have been arrested and are under the threat of being executed. They also called on the international community for urgent action and pressure on mullahs to stop killing Iran protesters.