The gas price hike in Iran has drowned the mullahs’ ship 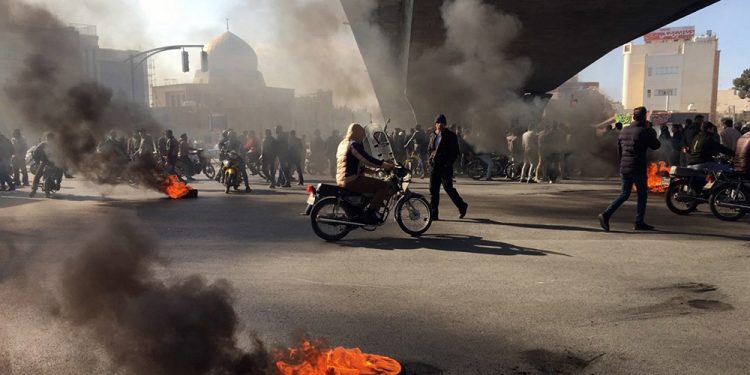 Hours after the sudden announcement of a gas price hike in the early hours of November 15th, everyone was in shock

The gas price hike in Iran has drowned the mullahs’ ship

Before the 1979 Revolution, US President Jimmy Carter said that Iran was an island of stability and Shah was claiming that his regime is the first power in the region. Soon after, when the people poured in the streets, there was nothing left of the island of stability or the power of the Shah, and he had to flee Iran in the most humiliating way.

Today as the Iranian regime and its lobbyists and supporters claim, this country is not an island of stability, as it indicates, but a volcano that can erupt at any moment, and this is just the beginning.

What happened after gas price hike?

Hours after the sudden announcement of a gas price hike in the early hours of November 15th, everyone was in shock. Some protested the government’s move in the early hours by turning off cars in the middle of the streets. Then protests and clashes became the main scene.

Later it became clear that the gas price hike have been announced and implemented  through the coordination of all three branches of the government.

according to an internal document that was newly publicized, Khamenei sent a message to the parliament to force MPs cancel a high priority draft legislation to revoke the decision, so the regime can provide part of the government’s budget and terrorist groups and the Revolutionary Guards out of the people’s pockets.

Earlier in 2017, the regime experienced gas price hike but failed and retreated.  In 2018 the regime’s oil minister, Bijan Zanganeh, responding to a reporter who had asked “how long will this price increase (gas) be logical,” said: ” As long as people tolerate it (we will make gas more expensive). ”

But the recent gas price hike has had a very different reaction from previous years and has triggered widespread protests across the country; But did these protests really came against the gas price hike?

Let’s take a close look at the recent protests and slogans and actions of protesters in more than 180 cities.

In the protests, people also set fire to government buildings, gas stations and banners of regime supreme leader Ali Khamenei and the monument of the ring of regime founder Ruhollah Khomeini. They also attacked the offices of the Friday prayer Imams, who represent Khamenei.

We can see that the aim and demands of the people was not only rooted in the gas price hike, but also confront the regime’s sovereignty and bases.

Compared to the previous protests in both 1999 and 2009, the level of participation and the depth of demands, grievances and the kind of slogans are quite different.

If the student movement of the 1999 was unique to a particular class or the 2009 uprising, there was a rise associated with the governing body. But this time, the protesters who came to the streets in more than 189 cities across the country were from the impoverished classes, which the regime has long considered as its base.

On the one hand, we have witnessed high inflation and a shaky economy, and since the protests of December 2017, a complete security atmosphere and public oppression that includes all segments of society.

This volume of internal discontent reveals the fear and inability of the regime.

On the other hand, the atmosphere created by the US withdrawal from JCPOA and sanctions on Iranian companies and individuals and increasing tensions with other countries, especially Saudi Arabia, have put Iran’s shaky economy on the brink of collapse. It is almost politically isolated. The regime is barely able to fund its proxies in Lebanon, Palestine, Iraq and Syria.

Also, the uprising of the Lebanese and Iraqi people has severely weakened the basis for Iran’s foreign intervention. The popular uprising in Iraq has openly condemned and targeted Iranian intervention. Iraqi protesters torched the Iranian consulate in Najaf three times in a row.

Of course, it is clear that protests have been going on all over Iran every day, and rarely have there been a day without protests in several cities.

Strikes and Protests in different cities in Iran

Strikes and Protests by Haft Tapeh Sugar Cane Workers, Hepco Arak, Qazvin Counter Factory, Ahvaz Steel, Tabriz Railway workers and Tractor Co., , pensioners, and teachers… are among the protests that were heard every day in a corner of the country. These protesters are shouting their righteous demands to the deaf ears of the government.

This time, with the gas price hike, that pushes all segments of society and causing other commodities to become more expensive, people forged greater unity and greater partnership.

The gas price hike has ignited the anger of the people and they protest against everything in this system.

Corruption, the inefficiency of the system and the authorities, the suppression and terrorism of the Islamic Republic, have destroyed the integrity of people’s lives without exception. The government responds to any form of protest or liberation and democratic movement with the most severe repression from torture to physical extermination.

These protests are the flame of forty years of dictatorship and the killing of political prisoners and supporters of the PMOI and their families; who are still looking for the graves of their children and the prosecution of those involved in that massacre.

Overthrow is the inevitable fate of any dictatorship, however oppressive it may be. This is an unwritten law on popular uprising.

Every time a dictator represses the people, a stronger and more organized uprising will emerge.

These flames of revolution that are raging in Iranian cities these days are the result of long pressure that has been unjustly passed on to the people that would undoubtedly be the beginning of the overthrow of the regime.

All signs point to the continuation of the protests.

During these protests, fortunately, the people gained a very valuable experience that all classes must continue in a coherent line.

Iran is not an island of stability and peace, as the regime, its lobbyists and supporters and appeasement seekers suggest but it is a volcano that can erupt at any moment, and this is just the beginning.

They pierced their ship with gas price hike and will be drowned as the Shah’s ship sank.