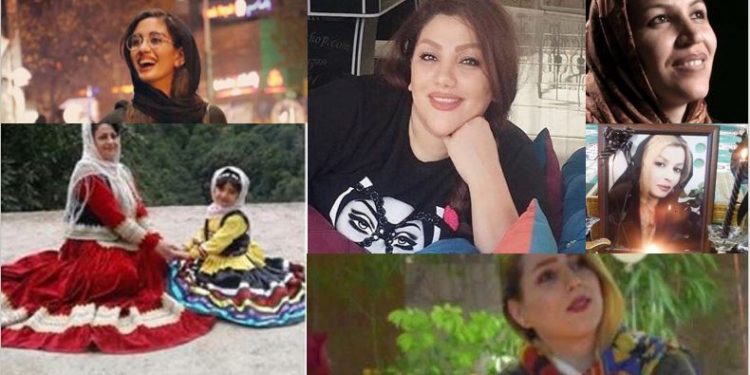 Based on report received by the Iranian Resistance from within Iran, the names of 400 martyrs have so far been verified.

In many instances, the regime used machine guns, helicopters, and tanks to clamp down on protesters.

In this report we have listed the names of some of the young women and girls killed by Iranian security forces, including the Basij and the Revolutionary Guards.

Mahnaz Mehdizadeh Nader, another woman, was shot three times by the Special Units of the State Security Force during the Iran Uprising in Karaj in mid-November. At the time of handing over of her body, government agents warned her family against disseminating the news of her death.

Also Ms. Golnaz Samsami, a young woman, was shot in the head in Shahriar during Iran protests.  Golnaz Samsami was going to work and noticed protests taking place nearby. She rushed to the support of someone wounded when she herself was shot directly in the head by the state security forces in Shahriar, Tehran. She had an 8 year-old child.

A nurse by the name of Azar Mirzapour was reported killed in Karaj. Azar, mother of 4 children, was a nurse working in a hospital in Karaj. She was shot in the head by the Revolutionary Guards. No more information is available on her.

Nikta Esfandani was shot in the head by security forces on November 16, 2019, in Tehran’s Sattar Khan Ave. The family of Nikta Esfandani looked for her for three days before they could receive her body. Regime’s officials told her family that since she was only 14 and was a kid, they would not ask for the cost of bullets. Born in April 2005, she was buried in Behesht-e Zahra cemetery on November 20, 2019.

59 year old Mina Sheikhi was killed in Tehran during Iran Protests in the past few days. She was from the SW city of Saqqez and had come to the capital to visit her daughter.

Ameneh Shahbazifard, she was shot dead on Sunday, November 17, 2019, but her body has been just recently handed over to her family who were told to bury her in the dark of the night. Ameneh Shahbazifard, 34, is mother of two boys and a 4-year-old girl. She was trying to help someone wounded but was shot in the head by security forces.

Three names of women were also announced who have been killed by security forces during the uprising in Tehran, Abadan and West Azerbaijan. Nassim Ghorbani in Tehran; Halimeh Samiri in Abadan; and Sepideh Hassani from Soldouz in Naghadeh, West Azerbaijan Province.

Halimeh Samiri was arrested and detained during the protests in Abadan. She was tortured to death by the regime’s revolutionary guards who later threw her lifeless body outside her father’s residence.

Sepideh Hassani was shot dead by security forces during the protests in Tehran. She was buried in her hometown of Soldouz, in Naghadeh.

In Robat Karim City, near Tehran, Marzieh Abbaszadeh and Maryam Nouri were killed by regime armed forces. Parisa Seifi was killed in Kamyaran and Ziba Khoshgvar in Sanandaj, both cities in the Iranian Kurdistan.

According to Kurdish sources, an unidentified female student was slain in Sanandaj, capital of Kurdistan Province. A student who had witnessed the scene, said a female student from Saqqez was hit by a tear gas canister in the abdomen on Sunday night, November 17, 2019, and eventually died.

Also on Tuesday, November 19, 2019, a young girl student was targeted by a State Security Force helicopter.