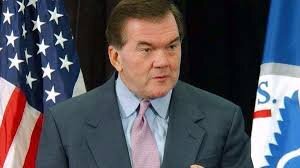 Tom Ridge: You’re very, very kind, thank you very much. You’re very kind. Madame Rajavi and guests, if you permit just one very, very personal expression of gratitude, less than two years ago I suffered a very, very serious cardiac arrest. I won’t go into the details but I think I died a couple times on the way to the hospital. And in the course of my recovery, I received probably hundreds of letters and good wishes and prayer groups and the like.

And there’s not another group of people globally, another group of men and women with whom I’ve been associated over these many, many years that sent me more cards of goodwill and of prayer and of support than those committed to your cause and your mission, the Iranian diaspora around the world. And I suspect some good wishes and cards from Ashrafis. So, I thank you for that kindness and your love.

In the course of human history, recent history, the world has recognized and recorded the extraordinary leadership of women in trying and difficult and challenging times confronting their country, their region and their value system. I think of Golda Meir in Israel.

You think of Margaret Thatcher in Great Britain. Of course there have been many laudatory and richly deserved comments and expressions of gratitude and sincerity, affection for you, Madame Rajavi. Another woman I met a couple days before she was assassinated was (Bena Zabouto).

So you can imprison a man or a woman but you can’t kill an idea. She also said, “You can exile a man or a woman, and you can’t kill an idea.” And I say to each and every one of you with whom I’m privileged to have had many conversations over the years, we’ve listened today and will continue to listen to tributes to your courage, to your sacrifice, to your relentless pursuit of justice and liberty and freedom in your home.

A home, a country, with a culture, a history, rich in tradition and rich in contributions to the rest of the world. And as you engage in this fight today—and as I said yesterday you will not be denied, you will at the end prevail—you now fight for all those who cherish freedom and liberty and justice globally.

Their prayers are now with you as your prayers were with me and with so many others. That you succeed because at the end of the day, as my friend and so many people have referred to our friend Senator McCain, sometimes in your life you have the opportunity to pursue and embrace causes bigger than yourself.

Tom Ridge ended his speech saying: And at the end, you will prevail. There will be an open, pluralistic, non-nuclear, democratic Iran, and you, you, your courage, your sacrifice, will be responsible for future generations to enjoy the liberty and freedoms that those of us blessed to live in countries that embrace those freedoms sometimes we take them for granted every day.

We need to look to you and remind ourselves how precious those freedoms and liberties and opportunities are. God speed on your journey. We will be with you all the way to the streets of Tehran.