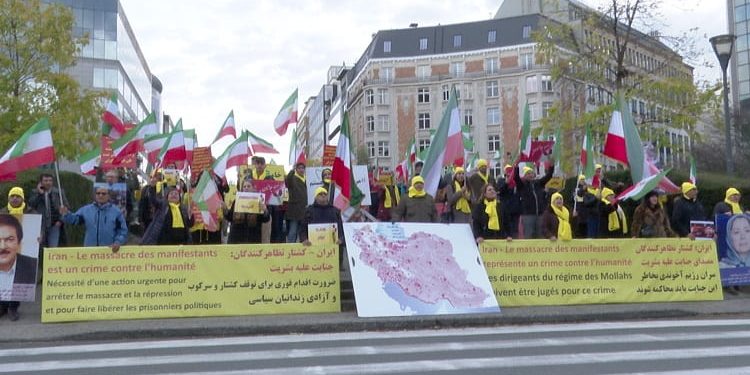 Schuman Square in central Brussels and in front of the European Parliament on Tuesday, December 17, witnessed three days of demonstration of Iranians, MEK supporters in Brussels in support of Iran protests.

Several dignitaries delivered speeches in this program including: Professor Eric David, Professor of International Law in Belgium, Paulo Casaca, and Belgian priest Father Daniel, as well as Asghar Adibi, member of the National Council of Resistance, and Masoud Kashefi of the Iranian Society of Physicians in Belgium.

The speakers urged the European Parliament to condemn the Iranian regime’s killing of protesters during the uprising and the wave of arrests and repressive measures by the mullahs.

In support of Mrs. Maryam Rajavi‘s appeal to the United Nations Security Council to declare the Great Massacre in Iran a crime against humanity, they emphasized the need for urgent international action and the prosecution of the perpetrators and demanded sending an International Investigation Panel to the Iranian regime’s prisons.

Speaking at the demonstration by Iranians, MEK supporters in Brussels, Professor Eric David said: “Thanks for inviting me to these demonstrations.

As a lawyer, I can say that naming the facts that is happening in Iran at this moment as a crime against humanity is by no means an unrealistic and inappropriate naming. It exactly matches with the definition we find in the Statute of the International Criminal Court in Article 7. In particular, intentional killings and harassment for political reasons, which deny all fundamental rights and freedoms, all these happened in the context of regular or public attacks.

So, you have all the criteria for content and material crimes against humanity here, and so it’s important for us to identify the perpetrators.”

Eric David added: “It is true and not surprising that the Iranian regime unfortunately does not sign the Statute of the International Criminal Court and as a result it cannot enter the court and recognize the crime. But the reality is, for example, a country like Belgium, which is currently a member of the Security Council, can submit a resolution to the Security Council and ask the Council to submit the issue of Iran to the International Criminal Court.

“This is what has happened before, especially for Libya in 2011 or Sudan and the 2005 Darfur massacre. So, this is something that can be done in accordance with Article 12 of the Statute of the International Criminal Court. I know that there is a small problem right now, and it is usually that a government like the Belgian does not take any risk for this kind of initiative. But it must consider that the inaction and passivity for crimes against humanity that are currently committed in Iran cannot be justified.”

Professor Eric David emphasized: “The fight against impunity for criminals is binding on all members of the international community and the commitments of the member states of the international community and the numerous resolutions of the UN General Assembly and the Security Council are binding on all countries to prevent these crimes, especially the prosecution of perpetrators and officials and all those involved in this crime.

“Even if the ICC fails to address this, the fact is that if the Iranian regime’s leaders want to leave the country, in whatever country they enter, they can be criminally arrested and prosecuted for responsibility for crimes.

“So we must act and call on governments to ensure that the Iranian regime, especially its leaders, must respond to the crimes they have now committed against the Iranian people.”

Paulo Casaca’s speech at the demonstration by Iranians, MEK supporters in Brussels

Dear friends our first thoughts are unfortunately once again for these thousands victims of the savage repression of this theocratic regime that has no respect for human life. They have no respect for freedom.

No respect for human dignity. They have been targeting people to kill. It is an assassination and mass assassination and when we look at the last photos of  the bodies that are being recovered in dams, rivers, and we realize that these bodies suffer tortured before being sent to the rivers they are murdering over ten thousand people they arrested. And they are giving instructions for the thousands of those who were injured not to be treated in hospitals. This is exactly the same regime that needs the massacre of 88. They didn’t change.

And they didn’t change because they were not persecuted. They were not prosecuted yet and whenever you have assassins that are made to believe that they can go unpunished the result is the same. They will continue that We will tell them and show them that they cannot do it.

But I also have to say to you that this is also a moment of pride for all the Iranian people. This has been a proof of courage that really is difficult to find anywhere anywhere else. The Iranian people Showed in nearly instantaneous way. That it was united against this regime, that it wants to get rid of the mullahs and it is ready to sacrifice its own life for its purpose.

And so, you as Iranians you have all the reasons to be proud. To be proud of your history. You are the country of Cyrus the great that initiated the first human rights law.

Your country has now been hijacked by some gangsters, the mullahs that claim to be acting in the name of religion but are just gangsters. they are thirsty for power for money for actresses. That’s all they are interested in. But you should be proud, and you should also be absolutely certain that with courage like yours, friends like yours will never be able to be extinguished.

We have been hearing those who have been all the time appeasing the regime and prevented. Reformist elements within the regime are trying always to get new excuses to continue to engage with the regime and now they say well it’s because of the sanctions. The sanctions are the reason why Iran is in such a bad situation.

How can they explain that next door in Iraq the people that are being subjected to the same Revolutionary Guards oppression in Iraq.there are no sanctions in Iraq, but the people are rebelling as well in Iraq.

Well I didn’t fight you. This is an indictment that has to be followed. European institutions over there they have to follow his indictment. If they are true, if they have any belief in human rights, they have to follow this indictment. They have to persecute by all means the criminals identified here as they’re responsible for these acts. They have to insulates the theocracy in the international scene. They have to block its expansion. And so please continue. Don’t give up. Follow the example of those who fell already in this battle. Go on challenging these murderers, assassins, gangsters that are now installed in the power in Iran.  Never give up. Iran shall be free

Father Daniel’s speech at the demonstration by Iranians, MEK supporters in Brussels

Father Daniel, a renowned and progressive Belgian priest, was among the speakers at the Iranians and MEK supporters’ protest in Brussels. In his speech, he condemned the massacre of over 1,500 people during the recent Iran protests by the Iranian regime and demanded justice for the victims.

Asghar Adibi, member of NCRI, at the demonstration by Iranians, MEK supporters in Brussels

Asghar Adibi, former Iranian national athlete and member of the National Council of Resistance of Iran (NCRI) also spoke at the Iranians and the MEK supporters’ rally in Brussels. He said, “We have relentlessly continued our resistance to achieve freedom, and we have dedicated thousands of martyrs for this cause. We only have one goal, which is the downfall of the Iranian regime and the Iranian people’s freedom of choice to have their desired government. We will continue this path alongside with the MEK’s resistance units and nothing will hinder us from paying the necessary price.”

He continued, “Like our risen compatriots we chant ‘the mullahs should get lost.’ Despite mullahs’ claims this nationwide uprising will continue until the downfall of this criminal regime. The dawn of victory is near. There will be one day, when we celebrate in a free Iran, alongside with the rebellious youths and the MEK’s resistance units. And that day is not far from reach.”

Doctor Massoud Kashefi member of the Iranian Doctors Society in Belgium at the demonstration by Iranians, MEK supporters in Brussels

The last speaker of the rally of Iranians and MEK supporters in Brussels was Doctor Massoud Kashefi, member of the Iranian-Doctors Society in Belgium. He said, “The blood of martyrs of nationwide Iran protests in November crimsoned the streets and stroke every Iranian’s heart with pain, it yet made them proud for having such brave children.”

“This uprising further increased our determination to continue our struggle and topple this barbaric and vicious regime,” he added.

While referring to the victims of the Iran protests and regime’s deadly crackdown on protesters Dr. Kashefi told the rally of Iranians and MEK supporters in Brussels, “The Iranian regime’s suppressive Revolutionary Guards killed over 1و500 protesters. Among them are innocent minors. The last look of 14-year-old Nikita reminds us the last look of Neda Agha-Soltan, the symbol the 2009 uprising, and the one of Saba Haft-Baradaran who was killed in Camp Ashraf, Iraq in 2011. These looks inspire us to continue our struggle against this brutal regime.”

“The Iranian people with their courageous protests cried their desire of regime change. The rebellious youths once again targeted the regime at its entirety and repeated this slogan that ‘reformist, hardliner, the game is over.’ Their courageous actions dismantled all plans to continue the appeasement policy with this regime,” he told the rally of Iranians and MEK supporters in Brussels.

“I use this opportunity to say that this regime has reached its end. I say to those who seek the appeasement policy with this regime and its so-called ‘moderate’ faction that don’t try to prolong the regime’s life. This hideous action is far worse than killing the Iranian people. As the we reach winter, we hope that winter of mullahs in Iran ends soon and the spring of freedom start its reign,” Dr. Kashefi concluded.

200 Parliamentarians from all parties from European countries support Iran protests