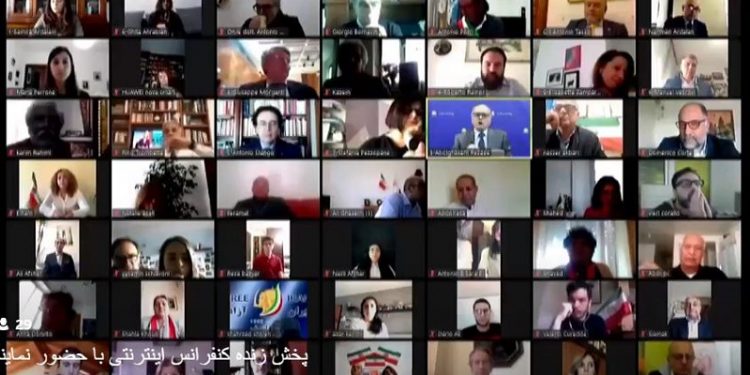 In recent days, there have been international condemnations of the Iranian regime’s continuing human rights violations. Since the beginning of the month, the Iranian regime has executed three individuals that were minors at the time of their alleged crimes.

The UN High Commissioner for Human Rights Michelle Bachelet urged Iran to immediately put a halt to the execution of child offenders, emphasising that it is a crime and that it goes against international human rights laws.

Further international condemnation of the Iranian regime’s behaviour was heard during an online conference that took place on Thursday 23rd April. It was organised by the National Council of Resistance of Iran (NCRI), the main opposition to the Iranian regime. Participating in the conference were several Members of Parliament in Italy, members of the Iranian community in Italy and a number of Iranian doctors and medical staff.

Participants highlighted the crucial role of the People’s Mojahedin Organization of Iran (PMOI / MEK), saying that it has been instrumental in debunking the regime’s lies and deceptions with regards to the Coronavirus outbreak. They also praised it for helping the people of Iran during this very worrying time.

Former Italian Foreign Minister Giulio Terzi participated in the conference, saying that the regime in Iran is the worst in modern history, emphasizing that it is a state sponsor of terrorism that has spent four decades causing turmoil. Mr. Terzi also condemned Iranian regime cover-up.

.@iran_policy :Mayor of Mesagne @tonimatarrelli:Iranian regime is threatening people who are telling the truth about #coronavirus, the situation in prisons is awful. The regime, instead of releasing the prisoners it has executed them.#COVID19 #Irama @GlobalCRL @HandsOffCain_En

Senator Roberto Rampi, another participant, described the conditions in Iran as “deplorable” and condemned the regime cover-up of the extent of the outbreak. He voiced his support for the people of Iran.

Senator Manuel Vescovi also voiced his support for the people of Iran, saying that he hopes they will be able to overthrow the regime so they can finally have a government that will look after their interests.

Member of Italian Parliament Stefania Pezzopane condemned the regime for plundering the nation’s wealth on terrorist activities and expressed her concern that the Iranian regime is prolonging the current heath crisis.

Former Member of Italian Parliament Elisabetta Zamparutti highlighted that the regime is the source of all troubles in Iran. She said: “The real virus we must confront in Iran is the totalitarian regime. This is the regime provoking more death and poverty than any other virus. They are executing prisoners. The Death Penalty is dramatically wrong especially currently, amid the coronavirus outbreak in Iran.”

The latest figures coming from the PMOI / MEK indicate that more than 34,700 people have died in Iran after contracting Coronavirus. The situation is still not under control and there is expected to be another huge spike in the infection rate now that Iranian President Hassan Rouhani has ordered the people to resume normal working activities.

Just as #Ramadan starts, regime in #Iran is taking on even more executions of detainees. Many of whom protested to be released, in order to protect themselves of #coronavirus spread. @WHO https://t.co/CAfydzOkXR pic.twitter.com/hrtLWjEBJ9

The criminal regime is acting in its own interests, ignoring the plight of the people and leaving them more vulnerable than many people across the world. Many nations in the international community are fighting the same fight against COVID-19, but the Iranian regime’s negligence stands out. International intervention is urgently required.