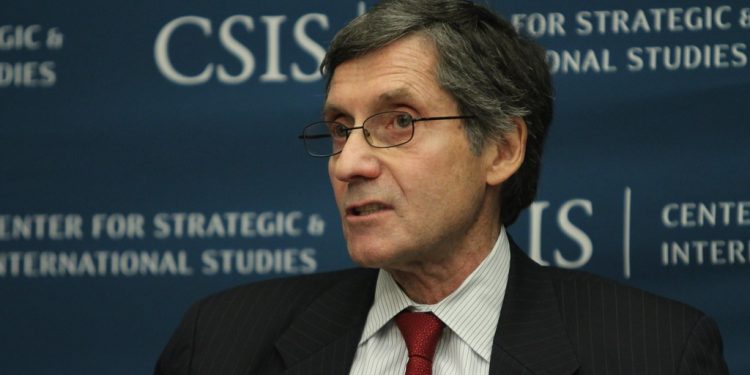 The National Council of Resistance of Iran’s United States Representative Office (NCRI-US) held an online conference on June 3. The NCRI’s conference was attended by renowned American politicians and entitled: “The Growing Threat from Iran’s Regime.” Iran Freedom has previously published speeches of other speakers of the NCRI’s event.

In this article, we intend to use Ambassador Joseph DeTrani remarks during the NCRI’s event. Ambassador DeTrani was the United States Former Special Envoy for Six Party Talks with North Korea. Here’s the full text:

Ambassador Joseph DeTrani: It is an honor to be here with the indeed all of you, certainly this distinguished panel.

Let me just say, I spent a few years in Tehran at the American embassy before 1979. I got to know the Iranian people and I like the Iranian people. And the history, the culture of the country is so rich. I must say this. It’s so sad to see what’s going on with COVID-19. Alireza you mentioned that in the beginning, and we see this in the press, what’s happening to the people on that issue. And our sympathy goes out. And hopefully the regime will work harder to protect the people.

Let me talk a little about some of the issues we’re here to discuss today. And that’s the nuclear JCPOA agreement in 2015 and all aspects to that.

As Alireza mentioned, I was negotiated with North Korea for over two years negotiating an agreement. That we had in September 19, 2005. It took us two and half years and what we demanded from North Korea, and we continue to demand is complete, verifiable, irreversible dismantlement of all nuclear weapons and nuclear weapons programs. The JCPOA with its sunset clause, and with other aspects to it, was so different. What we were telling Iran is within 15 years, 2031, you can spin as many centrifuges as you want. You can enrich at any level you want. And we knew Iran pursued a nuclear weapons program prior to 2003. They were actively working on that program. And what that would mean in 2031? What a message to the region if Iran has a nuclear weapon?

So, what I saw in the JCPOA was a sunset clause that said in 15 years you can enrich at any level. And in 10 years, you can build more sophisticated and Olli just mentioned the sophisticated nuclear the centrifuges that are available, the IR2s, et cetera, which would spin that much faster, which means they could move that much quicker towards a nuclear weapon. So, by definition, I had problems with the JCPOA, the nuclear agreement.

But I was told something else, that this will be transformational. This would transform Iran’s behavior and they will become a legitimate stakeholder and they’ll behave and there’ll be good behavior. Well, Undersecretary Rood just made a very strong case for that not happening because immediately after 2015, and immediately after the moneys were made available, moneys that were frozen but some of the other money that was made available to the regime, that their military budgets increased and their activities became that much more potent. Whether it’s Hezbollah in Lebanon, the Houthis in Yemen. Whether it’s the militias, the Shia militias in Iraq, whether it’s their activities in Syria, I go down the whole list that undersecretary Rood spoke about so eloquently. They didn’t change. This wasn’t transformational in a positive way. It was transformation in a negative way. They felt more, the sense at least I had, emboldened that they could be more active, and they use the IRGC and the Quds Force in a very, very aggressive manner. In a very blatant manner.

So, you have to wonder about that. Now, it was mentioned a few minutes ago about the arms embargo that will be lifted in October. And we haven’t talked about missiles. Well, missiles are an issue that we have followed very closely with Iran. One of the reasons is because they’ve worked very closely with North Korea, getting a lot of missile technology from North Korea. The type of Dong-2 specifically. So we look at the Shahab-3, the Shahab-5, the Shaha-6, and when you look at the commitments made by the Supreme Leader that we will not have anything that goes beyond 2,000 kilometers, you have to question that. Because they’re working on missile capabilities that reach the whole of Western Europe and eventually the United States. That’s powerful. And when the arms embargo is lifted, there will be they will have access to components that would enhance the capabilities to permit those missiles to have greater reach and with greater reach, also to deliver a nuclear weapon.

So, briefly, the JCPOA, in my estimation, was a path for Iran to eventually pursue nuclear weapons and, Olli made a very impassioned case and a persuasive case, that the IAEA and the monitors have never been given the access in Iran that would be required for a country that wanted to be very open and transparent about their programs. When they walked away from developing a nuclear weapon in 2003, then why not be transparent? Well, the monitors have always had problems getting in. And when we looked at this, whether it was Natanz to begin with, whether was Fordow or whether it was other facilities in Parchin, whatever it was, they’ve always had problems.

So, ladies and gentlemen, briefly stated, Iran’s behavior has been an issue of real concern. Not only to the people of Iran – and we see what’s happening with the Green Revolution going back to 2009 and even most recently – but also to the region and beyond the region eventually on that.

So, we have to be mindful of that. And again, with the IRGC and the Quds Force and again, even something very recent, the Ukrainian civilian aircraft that was shot down and the initial reaction from the regime was what? We didn’t do it. Oh, then eventually, when it became overly persuasive and when the evidence was very obvious, yes, we did.

So, when undersecretary Rood talks about maximum pressure, that’s where we are now. And until, in my estimation, the regime shows their behavior is changing and they’re not causing regional havoc with the IRGC and the Quds Force, whether it’s a Yemen, whether it’s in Lebanon, whether it’s Gaza Strip, whatever, or whether certainly in Syria or Iraq, and they are more overt with not only their nuclear programs but their missile programs and where they’re going, I think we have to keep the pressure on this regime. Understanding that it is the people of Iran that we care about. And that’s important. The regime has to understand, they have to be responsive to the people of Iran. And we would always be supportive of the people of Iran, but not a regime that exploits the people, and that is adventuresome in their region and a threat to the region and eventually. To the whole world. Thank you.