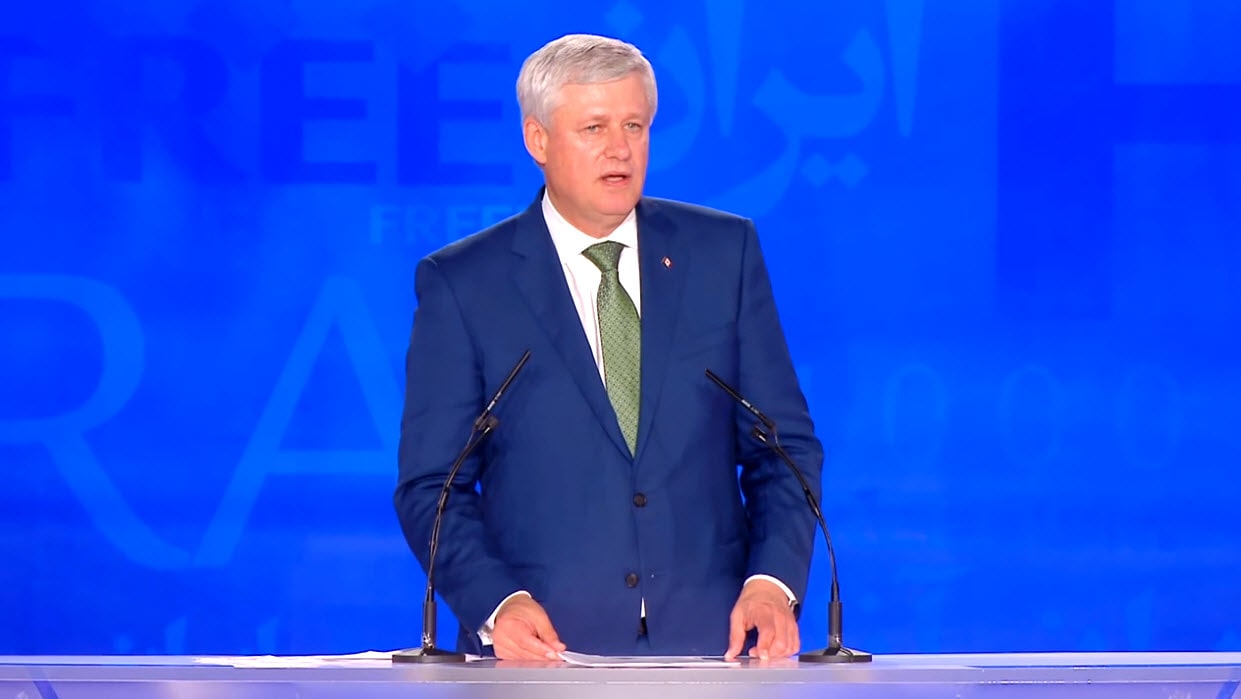 Canadian former Prime Minister Stephen Harper announced his support for the Iranian opposition led by Mrs. Maryam Rajavi and her the-point plan for achieving a free Iran in the PMOI/MEK members home in Albania Ashraf 3

Former Prime Minister of Canada Stephen Harper gave an inspiring speech to the annual Free Iran rally last July and his words are as important today as they were then, reflecting a massive change that needs to come in Iran.

The Free Iran gathering, held on July 13 in Ashraf 3, Albania, which is the new home of the Iranian opposition group, the People’s Mojahedin Organization of Iran (PMOI/MEK), was a rousing success, but its fight continues.

Harper began his speech by praising the people at Ashraf 3 for their hard work to transform the empty space into a thriving city, before moving on to talk about how the Iranian people’s freedom, which will be won by the people, is one of the most important causes in the world today.

He said: “In the year since we last gathered, the Ayatollah’s regime has openly increased its enrichment of uranium. It has stepped up its support for its terrorist allies and proxies in the Middle East and around the world. And it has taken the suppression of human rights to new levels. So, the need for change in Iran is greater than ever before and the need for the work of this organization on behalf of the Iranian people is greater than ever before.”

Harper explained that the regime was instigating new major regional crises at the time by having its proxy groups attack oil tankers in the Sea of Oman, fire missiles at neighboring countries, and shoot down an American drone in international airspace, which showed that the mullahs form “the single most dangerous regime in the world today”.

He said the only way to respond to this was through firmness, not appeasement, and advocated sanctions, oil boycotts, terrorist designations, and the closure of the regime’s embassies – something Canada had already done. In the 11 months since, the Iranian regime has seen further designations of its institutions and figures, as well as additional sanctions from the US that has near enough resulted in the destruction of Iran’s oil industry.

Harper said: “It is claimed by the apologists for the Ayatollah’s regime, [that] the world [has] a stark choice, appeasement or war. Now friends, you know and we know that is a false choice. Surrender to the regime’s religious fascism is not an avoidance of war. It is an acceptance of the war that the theocracy is already pursuing through its proxies and allies against its neighbors in the region. It is also an acceptance of its quest for nuclear weapons and an invitation for the regime to pursue the unspeakable greater war in the future. Weakness and appeasement will not avoid a military confrontation with this regime.”

He said that the world must stand with Madam Rajavi and her 10-point plan for the future of Iran, which includes democracy, human rights, justice, the rule of law, peaceful coexistence, gender equality, pluralism, private property and a market economy, the separation of religion and state, and a non-nuclear Iran.

These words ring true today. Iran must be free and so it will be free.