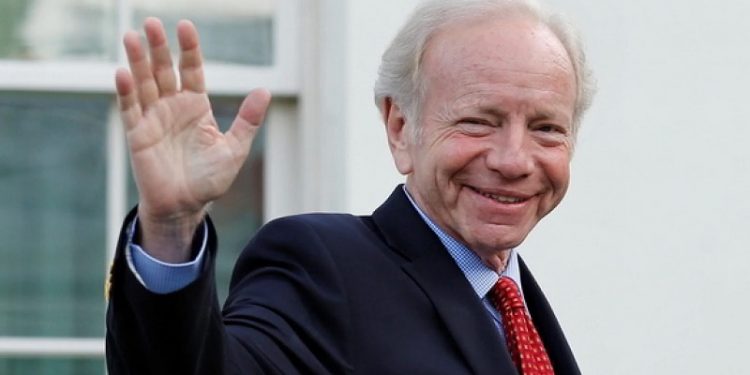 U.S. Sen. Joe Liberman declared his support for a free Iran represented by Ms. Maryam Rajavi, the president-elect of the National Council of Resistance of Iran (NCRI)

Iranians, members and supporters of the Iranian Resistance movement, along with renowned politicians from four corners of the world gathered in Ashraf 3, Albania, home to Iranian opposition group People’s Mojahedin Organization of Iran (PMOI/MEK), to hold the annual Free Iran rally in July 2019. The event was the fourth installment in a series of events held at Ashraf 3. The United States former Senator Joseph Lieberman, who was the Democratic Party’s nominee for Vice President of the U.S. in the 2000 election, gave a speech in this gathering. The following is the full text of his speech:

Thank you, ladies and gentlemen. First, thank you, Bob Torricelli. To receive such an introduction from anybody would mean a lot to me. To receive it from you in this place means everything to me because there is no American who did more over the years to bring the Ashrafis to freedom here in Ashraf 3 than you, Senator Bob Torricelli. Thank you.

It is not only an honor but exciting to be here in Ashraf 3. We gathered in some great meetings in Paris at this time of the year. The crowds were enormous. I never, even when I was running for vice president of the United States, spoke to a crowd bigger than I spoke to when the PMOI/MEK met in Paris. And as they say in a movie, we will always have Paris. Right? But there is nowhere I would rather be today than in Ashraf 3.

And let me explain why in first personal terms. For years, particularly the Iranian American community led by some great representatives in Washington, and Ali Reza, both do a great job for the movement. I want to applaud them. The cause of the residents of Ashraf, the cause of what I would call the prisoners of the bizarrely insane named Camp Liberty, was embraced by more and more members of Congress of both political parties. You’re a cause.

We were irritated and anxious when your freedom was repressed when you were let down and you were treated unfairly, including by the United States of America. We were hurt and heartbroken and angry when you were terrorized and murdered in Camp Liberty by Iranian forces. But you were a cause for us. This weekend, we have met you.

You are real people. We have heard your stories. You have deepened our commitment to stand with you every step of the way from the hell that you lived in Camp Liberty to the heaven that will be life in liberated Iran.

Sen. Joseph Lieberman continued: Well, it’s hard not to believe on a weekend like this, in a gathering like this, with so many leaders from around the world who are saying to you not just that Iran is ready for a new day and dawn of freedom, not just that you are ready for a new day of dawn and freedom in Iran, but for all of us around the world we are ready to stand with you in the fight for freedom. And though our language skills might not be great, we have all learned a phrase this weekend. (Hazzer, Hazzer, Hazzer) We are ready. AND we will stand with you every step of the way. (Hazzer, Hazzer, Hazzer).

Now, why do I say a new day is dawning? It’s not there yet but we’re getting close to a new day of freedom in Iran. It’s because of a confluence of forces that have come together. And the first is represented by the liberation of Ashrafis and the miraculous building of this community here in Albania.

Now, this great movement, you suffered, you refused to yield, you refused to give in, but right alongside you was the NCRI and the MEK led by Mrs. Maryam Rajavi. They would not leave you behind.

It might have been easy. But in standing with you and fighting for your freedom, they told the rest of the world a lot about themselves. And you told us a lot about this movement. And now that you are here, the NCRI and the MEK can focus with full attention and energy on the ground, on the battlefield for freedom in Iran.

Resistance groups are growing every day as the regime is weakening every day. There was a while after the Iran nuclear agreement was signed in 2015, in spite of the fight that many of us made against it because it was a bad agreement for the Iranian people, for the United States, for the world, for all the reasons that have been said, I thought that a new day could only dawn from the ground up in Iran.

And of course, that’s necessary but now something new and different has happened. And what I’m about to say, I’m saying as a Democrat and I’m saying as somebody who didn’t vote for Donald Trump in 2016, and that’s why I hope you believe I’m saying it with all the more sincerity.

Sen. Joseph Lieberman emphasized: President Trump has been heroic and historic in taking the actions he has to break the Iran nuclear agreement, to impose sanctions on the Iranian government. We have gone from the specious, the baseless charges of terrorism against the MEK, NCRI, now to where they truly belong. Today, it’s the IRGC that is clearly known and designated as a terrorist organization. And that’s what it is.

So now we have a coming together of forces for freedom. People angry, upset, deprived of their freedom, deprived of their opportunity, sick of this radical religious dictatorship that has seized a great nation and holds it captive. They are yearning to be free. Now we have religious organizations gathered together in the NCRI, building networks throughout the country.

And now we have the United States of America. And hopefully, as Rudy said so eloquently and passionately, our allies in Europe and throughout the free world standing against this regime in Tehran and for the people of Iran. Yes, my friends, that day of freedom in Iran will soon be dawning if we stick together and make it happen. And we can. And we will.

Now, there will be people, particularly at this moment of opportunity, who will argue for accommodation with the regime in Iran because they will say it’s impossible to overthrow a regime like this. They will argue for appeasement. And we know where that got Chamberlain with Hitler in Europe during the 1930s. It got us World War II and millions of deaths in that war.

They band together and they won their freedom, just as you will win your freedom as we band together with you in that historic cause. They said that to, well, to the freedom fighters in Russia, to people like Sharansky and the other refuseniks and poets and playwrights, human rights activists in the Soviet Union. Impossible, how would you bring the Soviet Union down? They didn’t listen and they succeeded just as you will succeed. Because history is on your side.

In the end, freedom and justice and right always prevail and that is what the NCRI and the MEK represent. Yes, my friends, (Hazzer, Hazzer, Hazzer) (Ready, Ready, Ready).

Now, there’s someone you and I both know if he were still alive would be here today. A great fighter for human rights throughout the world and a devoted believer in the cause of freedom for the people of Iran and the cause of the NCRI, PMOI, MEK. And that is my dear and our dear beloved friend, a blessed memory, the honorable John S. McCain, Senator from Arizona.

Thank you. Thank you. God bless his soul. You know, I’m spiritual enough to believe that he heard that up there and thank you.

John could not be here of course today, he left us last August. But he was in Ashraf 3 in April of 2017. And I want to bring back to you the words he said, he would be so astounded and impressed by what has become of Ashraf 3 today. And here’s what John said on that day to people who are here, “You have stood up and fought and sacrificed for freedom, for the right to determine your own future, for the rights that are given my God.

I thank you for being an example to the whole world that those who are willing to fight and sacrifice for freedom always will achieve it.” End of quote from John McCain. I’m proud to bring his words to you because they are true. The battle to liberate Iran from the radical religious dictators who control it today is a battle that not only has great significance for the people of Iran, but for the cause of freedom throughout the world.

And if I may go one step further and add this word about what a new Iran will mean to the world, one of the great and really unnecessary conflicts that destabilize our world is the battle that was begun by radical extremists who have exploited and expropriated the religion of Islam.

And it will end when those who led that revolution who have imposed the radical religious dictatorship on Iran, who have carried out aggression in countries throughout the region, who have supported terrorists, Islamic extremist terrorists, Shia and Sunni, regardless because they agree with the extremism and radicalism.

The day when the unnecessary conflict between Islam and the rest of the world ends is the day that the radical religious dictatorship in Iran falls. And that is the larger cause for which you all are fighting every day. And it is not, it is not just that you represent an alternative to the ayatollahs, the mullahs in Iran today. You represent the right alternative.

And it begins, as every movement must—the movement doesn’t happen automatically. A movement needs a strong principled collaborative leader. And that is what you have, thank God, in Mrs. Maryam Rajavi.

She is able, she is principled, she is visionary, she is selfless, she cares for every one of you. Yesterday, my wife and I walked through the exhibition here, the 120,000 martyrs, with Mrs. Rajavi. And she looked at those—it was really like walking through a Holocaust museum. And she looked at every one of the faces there as if they were members of her family.

That is the way she feels about every one of you and about every citizen of Iran. You are blessed to have such a leader and it makes it that much easier for my friends from the United States and around the world to stand with you as we will until victory is secured.

Looking at this movement’s history, it’s remarkable that you fought both the Shah’s dictatorship and then have stood against the mullahs as well, because your north star is freedom, is human rights. Ashraf 3 is the best testament to this fact, to the fact that this movement presents a viable alternative to the regime.