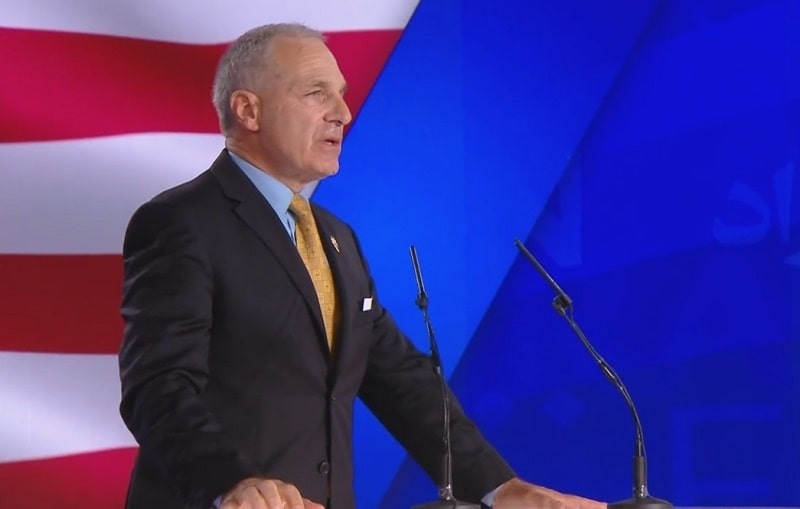 FBI former director Luis Freeh declared his support of the Iranian oppositions led by Ms. Maryam Rajavi and the MEK members for replacement the religious dictatorship in Iran with a democratic government

Every year, the Iranian Resistance holds a “Free Iran” rally. Tens of thousands of Iranians from around the world and supporters of the main opposition to the Iranian regime attend this major event. On top of this, there are also hundreds of special guests and speakers, including members of Parliament, administration officials, and so on.

Last year, the Free Iran gathering was held in Albania, in Ashraf 3 which is now the home to the People’s Mojahedin Organization of Iran (PMOI / MEK).

One of the special guests at this event that was held on Saturday 13th July last year was former Director of the FBI Louis Freeh. He is an avid supporter of the PMOI / MEK and has always spoken in support of the people of Iran.

He started his speech by commending Mrs. Maryam Rajavi for her dedication and her many years of working on behalf of the people of Iran. He said that she has inspired many people and that her courage is pushing the movement forwards.

Director Freeh said that the government of Albania is admirable for welcoming the many members of the PMOI / MEK into its country. He describes the Albanian government as showing an “absolutely remarkable act of humanity”.

He spoke about how far the Iranian Resistance has come over the past few years, emphasizing that much progress has been made in just a few short years. Freeh said that only a few years ago, those in attendance at the Free Iran rally were extremely concerned about the people in Camp Ashraf in Iraq, but now they have been freed. He highlighted the role of the United States in their release, reminding them that “those of us who supported for you became the subjects of criminal investigations by our own government”.

Freeh said that he has been very moved by the testimony he has heard from victims of the regime – the people that escaped execution, but were subject to very brutal abuse. He said that we must prepare for the “prosecution and conviction of the thousands of criminals who have murdered, assassinated, killed, not by accident, not by coincidence, but a designed plan to murder, mass murder a group of people”.

The PMOI / MEK had an exhibition in place at the time of the event and Freeh said that he does not consider it to be an exhibit – rather he sees it as “an evidence room” that contains ample evidence that coupled with witness testimony can be used to prosecute the criminal perpetrators.

Speaking about the biggest impediment to change in Iran, Freeh said that it is not the regime, but it is instead the many politicians around the world that insist on policies of appeasement towards the religious leadership of Iran. He said: “And the biggest threat […] to everything you’ve [Mrs. Rajavi] done, is not even the regime itself, it’s the politicians who will try to accommodate and appease and come up with the ridiculous type agreements that we saw in 2015 [Iran nuclear deal].”