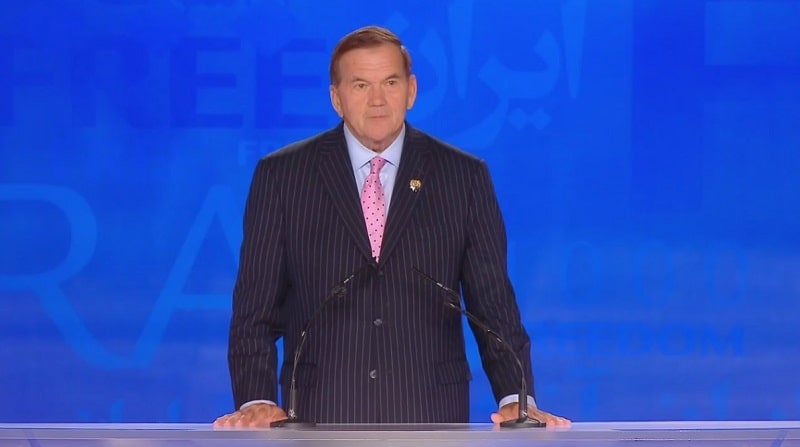 U.S. Governor Tom Ridge announced his support for the Iranian people and their resistance under the leadership of Ms. Maryam Rajavi for a free Iran

Every year, the main opposition to the Iranian regime holds “Free Iran” gathering. The turnout is phenomenal, with tens of thousands of Iranians from across the world in attendance. Furthermore, hundreds of prominent guests annually turn up to lend their support to the people fighting for freedom in Iran.

Former United States Secretary of Homeland Security Tom Ridge was one such guest at the 2019 Free Iran rally that was held in Ashraf 3, Albania, new home to members of the People’s Mojahedin Organization of Iran (PMOI/MEK). He addressed the audience in a very positive manner, emphasizing his support for the Iranian Resistance and the people of Iran who just want freedom, democracy, and human rights.

The former secretary commended Mrs. Maryam Rajavi, the president-elect of the National Council of Resistance of Iran (NCRI), on her exemplary leadership, highlighting the humanity and courage she has led the Resistance with. He said that Mrs. Rajavi stands alongside Golda Meir in Israel and Margaret Thatcher in the United Kingdom when it comes to female leadership. He highlighted that all of these women have faced very difficult challenges but have managed to lead with resolve and determination.

Secretary Ridge also recalled a conversation he had with Bena Zabouto who he met only a few days before her assassination. He said that Bena once wrote that you can imprison people but “you can’t kill an idea”. He said that this is exactly what has been happening with the MEK and NCRI. Men and women have been thrown in jail or executed, but the “idea” remains in place. It cannot be killed.

Speaking about the exhibition that was in place during the Free Iran rally commemorating the tens of thousands of political prisoners that were killed during one single summer in 1988, Secretary Ridge highlighted the brutality and torture the regime is responsible for. He said that he had met and spoken to former political prisoners that were tortured to the extent that the soles of their feet were raw, denied sleep, and even put into tiny cages for great lengths of time.

He told the Iranian Resistance and the people of Iran that they will succeed in their goal. He said that their freedom will not be denied to them forever and they are fighting “for all those who cherish freedom and liberty and justice globally”.

Senator Ridge said: “And at the end, you will prevail. There will be an open, pluralistic, non-nuclear, democratic Iran, and you, you, your courage, your sacrifice, will be responsible for future generations to enjoy the liberty and freedoms that those of us blessed to live in countries that embrace those freedoms sometimes we take them for granted every day.”

He ended his speech by reminding the people of Iran that they are not alone on this journey.