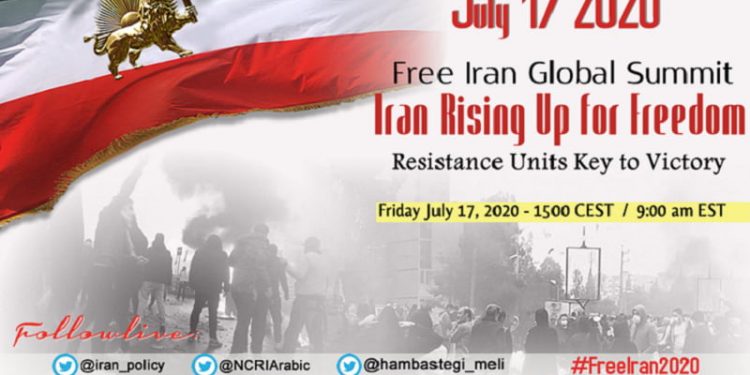 Iranian communities invite their friends and supporters across the globe to join them in the grand virtual gathering on July 17, 2020

At dawn on June 17, 2003, the Iranian opposition’s offices in France were exposed to coordinated attacks by the authorities of the time. European leaders were pursuing a friendly approach to the Iranian regime for economic interests. They practically appeased the ayatollahs at the expense of the Iranian people and their organized Resistance.

However, the plan was humiliatingly failed due to the sacrifice of selfless Iranians who preferred to die rather than live on their knees. Thanks to the Iranian diaspora’s efforts, after 16 days, Mrs. Maryam Rajavi, the president-elect of the National Council of Resistance of Iran (NCRI), returned to her brave supporters and insisted on the continuation of her movement’s struggle. “We are proud of the struggle against the religious dictatorship in Iran,” she said immediately after being freed from prison on July 3.

Since then, Iranian communities annually hold a grand gathering to renew their commitment to achieving a free Iran and pay homage to more than 120,000 martyrs who sacrificed their lives for freedom, justice, and equality in Iran. Additionally, Iranians demonstrate their strong support for Mrs. Rajavi and her ten-point plan for Iran’s future.

In this respect, many renowned politicians, military officers and generals, scientists, human rights activists, and parliament members join the annual Free Iran gathering to announce their support of the Iranian people’s desire for fundamental freedoms.

Last year, Ashraf 3, Albania, home to the main opposition group People’s Mojahedin Organization of Iran (PMOI/MEK), hosted nearly 350 prominent figures from 48 countries across the globe. For five consecutive days, attendees discussed, delivered speeches, gave interviews, and made public remarks about the role of the NCRI and PMOI/MEK in carrying out the Iranian people’s cries for freedom and democracy, and the Iranian opposition’s support inside Iran and beyond.

In her inspiring speech, Mrs. Rajavi announced, “We will take back Iran, and we will build a new homeland.”

This year, given the coronavirus pandemic’s prevalence, Iranian communities acknowledged that they would hold their annual gathering online on July 17. Like previous years, many distinguished figures will attend the virtual conference to announce their support for a free Iran.

Notably, on June 17, in a bipartisan resolution, a majority of the U.S. House of Representatives declared their solidarity with the Iranian people’s desire for a democratic, secular, and non-nuclear republic of Iran. They condemned the ayatollahs’ terror plot against the Iranian resistance and the PMOI/MEK members. They emphasized their support for the ten-point plan of Mrs. Rajavi for the establishment of a democratic government in Iran.