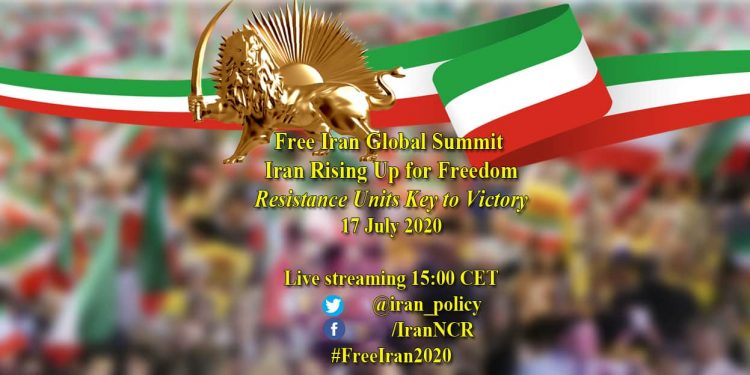 Iranian communities in different countries announced that they will hold an online summit on July 17 to show their support for Mrs. Maryam Rajavi, the NCRI's president-elect

The Iranian Resistance holds a “Free Iran” conference every year, attended by tens of thousands of Iranians and supporters of the People’s Mojahedin Organization of Iran (PMOI/MEK),  as well as hundreds of politicians, dignitaries, and activists, to discuss the situation in Iran. Most years, it is held in Paris, but last year it was held in the MEK’s new headquarters of Ashraf-3, Albania, where participants, as always, called for regime change by the Iranian people.

This year, it will be held virtually, because of the coronavirus pandemic, on July 17 with the important message that regime change is imminent and that the Resistance is capable of governing in the aftermath according to the 10-point plan of the Opposition Leader Maryam Rajavi, which includes human rights, separation of religion and state, gender equality, and a non-nuclear Iran among other things.

This announcement came just after a bipartisan resolution passed in the US House of Representatives advocating support for the Iranian people’s desire for a democratic, secular, and non-nuclear republic of Iran.

“The spirit of this resolution can be summed up in supporting the right of the Iranian people to change the regime and to achieve a democratic republic. It states that the Iranian people have rejected the monarchical dictatorship and, as well, do not accept religious tyranny and oppose it… Since the outset, we have declared that our goal is not to take power at all costs. Instead, our goal is to realize the Iranian people’s desires for the establishment of freedom, justice, and democracy at all costs,” said Mrs. Maryam Rajavi on June 20.

The only way to liberate the Iranian people is for the people themselves to institute that change and bring down the regime that has executed over 120,000 political activists over the past 41 years, including 30,000 during the 1988 massacre.

The Resistance has exposed the many crimes of the regime, from domestic suppression to terrorism to a nuclear weapons program, which has previously led the Iranian people up into protests in 2017, 2018, 2019, and 2020. Despite the violent crackdowns, these protests will continue until the regime is gone.

The National Council of Resistance of Iran wrote:  “Western governments and policymakers must realize that they need a complete break from the devastating policy of appeasement. They must respond to the regime’s regional aggressions firmly and decisively. More comprehensive sanctions against the extremist regime must be imposed. The regime’s embassies around the world must be closed down because they fund and facilitate international terrorism and espionage. And, last but not least, the legitimate rights of the Iranian people and their organized resistance movement to overthrow the brutal dictatorship ruling Iran must finally be recognized.”