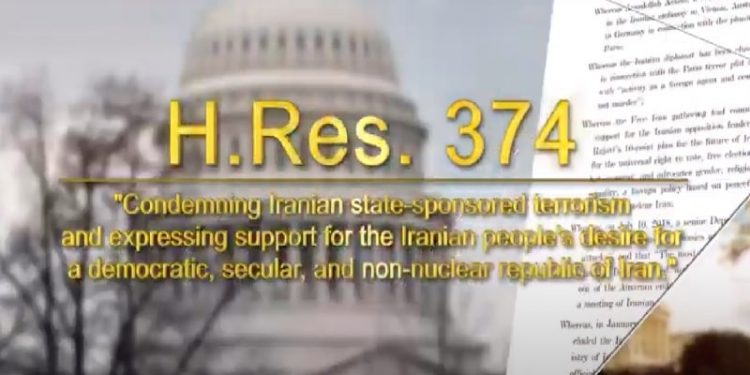 A majority of the U.S. House of Representatives extended their solidarity with the Iranian people's desire for a free Iran

The US House of Representatives passed a Resolution that offers a complete solution for the problems caused by the Iranian regime and shows support for the Iranian people, who have been “deprived of their fundamental freedoms”, in their fight for freedom.

Rep. Tom McClintock(R-California) said when he announced this bipartisan initiative that he sponsored that he had notified Secretary of State Mike Pompeo about 221 co-sponsors for House Resolution 374.

The Resolution states that Congress supports that Iranian people’s protest, recognizes their right to “establish a democratic, secular, and non-nuclear republic of Iran”, and is in favor of Resistance Leader Maryam Rajavi’s 10-point plan for a free Iran, which includes universal suffrage, human rights, and peaceful coexistence with other countries.

McClintock said: “[This] comes at a time when the Iranian opposition to the regime, National Council of Resistance of Iran, (NCRI) is steadily gaining momentum and has thus become the main target of the regime’s global terrorism.”

He went on to highlight how Iranian agents, disguised as diplomats or journalists would carry out attacks against the Resistance in the US and Europe, as well as in Iran. For the attacks on foreign soil, some agents were expelled or arrested, but far too many remain free. And obviously, for the attacks in Iran, there will be no justice while the mullahs are in power, particularly for the protesters killed in the November uprising or the 30,000 political prisoners killed in the 1988 massacre.

Prof. Raymond Tanter, who served as a senior member on the Middle East Desk of the National Security Council staff in the Reagan-Bush administration, wrote: “The growing role of the People’s Mojahedin Organization of Iran (PMOI) inside of Iran only reinforces the importance of adopting Resolution 374 and making groups like the PMOI and its parent coalition, the National Council of Resistance of Iran, a regular part of policy discussions regarding the Iranian regime.”

He explained that these groups play a vital role in the fight against the dictatorship to bring genuine democracy to Iran, which will occur with the minimal direct effort from the West, but this has made the regime more desperate to eliminate them, such as the attempted bombing of the Free Iran gathering in Paris, which was attended by 100,000 people.

Prof. Tanter, the Personal Representative of the Secretary of Defense to international security and arms control talks in Europe, wrote: “In short, with Tehran’s bid to crush the Resistance, Iran undertakes any operation it believes it can get away with. H. Res. 374 goes a long way toward regime change in Iran.”