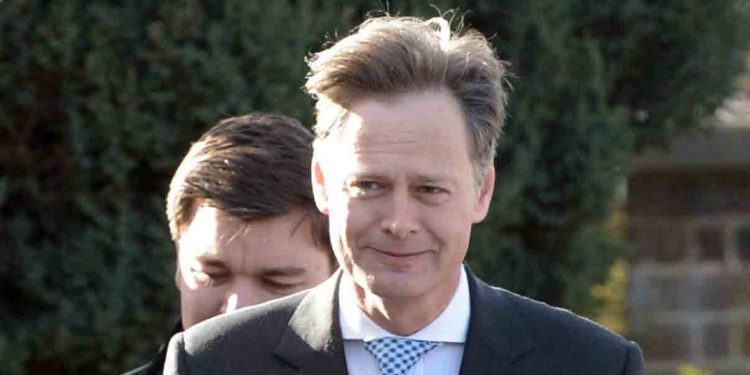 Dr. Matthew Offord expressed his solidarity with the Iranian people's struggle for a free Iran under the leadership of Ms. Maryam Rajavi

In the run-up to this year’s Free Iran conference, which will be held online on Friday, we have been revisiting some of the greatest moments of the 2019 rally, held at the then-newly established headquarters of the People’s Mojahedin Organization of Iran (PMOI/MEK), Ashraf 3.

Today, it is the turn of British MP Matthew Offord and his cheering speech about the shared values between the UK and the Resistance.

Offord said that the resistance movement is at the forefront of the struggle for a free Iran and serves as “a beacon of hope for millions of oppressed people in Iran”.

He went on to speak about the exhibitions erected at Ashraf 3 that looked at the regime’s vicious persecution of the Resistance, as well as human rights violations against the Iranian people as a whole and international terrorism. Then, about the victims’ testimonies.

He said: “These stories touched us. But we are already aware of who is responsible for this. We are aware of the IRGC, the Supreme Leader, the judiciary, and the Intelligence Ministry are all responsible for your persecution. But we need the world to be aware of that as well. Your story must be heard. And through initiatives like the museum, it will be. Your story will not be silenced.”

Offord said that this is why he called on the UK government to put the IRGC on their terrorist watch list and why he supports US sanctions against the Supreme Leader’s office.

He said: “I can assure you that the cause of human rights, freedom, and democracy in Iran has widespread support amongst all my colleagues here from the Houses of Parliament. And that support also includes support for Madame Maryam Rajavi‘s 10-point plan. This is a plan that gives a future for Iran, which provides a clear and viable alternative to the current theocratic regime.”

Offord spoke briefly about this plan, which includes:

He said: “These are all values that are close to our hearts, all of us here today. And they are at the center of our democracy in the United Kingdom. And that is why I call on our government in the United Kingdom to recognize Madame Rajavi’s ten-point plan. We want the UK government to recognize the democratic platform of Madame Rajavi, and we want the Iranian people’s right to change the regime for a better future.”