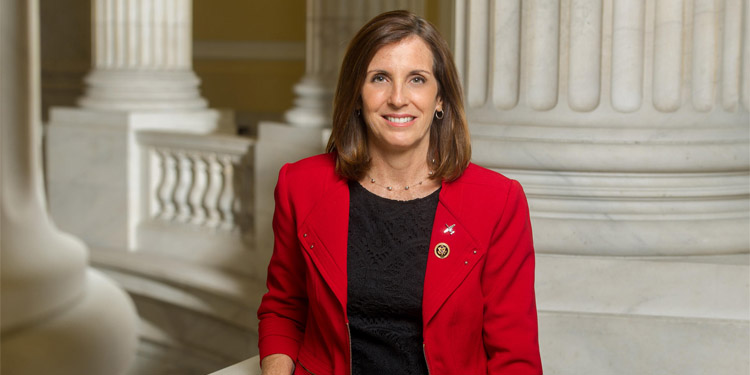 "It’s time for the Iranian people to be able to have their own voice, to be able to govern themselves and to have fundamental human rights and freedoms," Sen. Martha McSally

United States Senator from Arizona Martha McSally joined the Online Free Iran Global Summit on July 17. in her remarks, she declared her support of the Iranian people’s desire for freedom, justice, equality, and the rule of law. She asserted on her solidarity with the struggle of the Iranian opposition coalition National Council of Resistance of Iran (NCRI) under the leadership of Ms. Maryam Rajavi.

Thanks to freedom-loving Iranians’ hard works and determination, the NCRI managed to hold an unprecedented online gathering with connecting 30,000 locations to Ashraf-3, home to members of the People’s Mojahedin Organization of Iran (PMOI/MEK). At the event, Sen. McSally praised the freedom-loving Iranians for “putting everything on the line for God-given freedoms.”

Here is the speech of Senator McSally:

Hello, it’s such a wonderful honor to be with you today. I want to say congratulations to the National Council on Resistance in Iran. And also the Iranian American community of Arizona. I join you here from Arizona.

For my background, I served 26 years in our Air Force. I deployed 6 times to the Middle East and Afghanistan. I was a fighter pilot and the first woman in U.S. history to fly in combat and command a fighter squadron in combat.

So, I just want to say today, we are with you. The freedom-loving people of Iran, we are with you, we stand with you. God created us all with a desire to be free and I’m so grateful for all you do to stand up for the Iranian people and their God-given freedoms.

I’m also grateful for your focus on the equal participation of women in the political, social, and economic future of Iran. You all know and you’ve been hearing from many amazing speakers today about the dangerous Iranian regime. And it’s time for the Iranian people to be able to have their own voice, to be able to govern themselves and to have fundamental human rights and freedoms.

They are the largest state sponsor of terror. They have many hundreds of my fellow servicemen and women’s blood on their hands through their proxy forces in Iraq and killing American servicemen and women. You know their nuclear ambitions and ballistic missiles and malevolence in the region and the dangerous nature that they are in the world.

But also their authoritarian regime and the crackdown that it’s had on human rights for the Iranian people and the imprisonment and the death of so many brave Iranians who have been standing up for their own basic freedoms and rights that everybody deserves.

I stood against the awful deal with Iran. I thought it was weak and it didn’t address their other malevolent activity. And it just gave them an influx of cash to be able to continue with their repressive internal actions and their terrorist-sponsoring activities in the region.

So, I agreed in us pulling out of that deal and the maximum pressure campaign that President Trump and his administration have been putting on Iran. We have shown that it’s working. It’s squeezing off their cash. They need cash in order to continue to have repression and oppression against the Iranian people and funding their terrorist activities and proxy wars around the region.

We must continue in a unified way with our European partners to support the maximum pressure campaign. I know we have some European partners here today. We need you to stand with us and with the Iranian people. There needs not to be a wedge between us. We need to be unified in a maximum pressure campaign and the snapback of sanctions, and also to ensure that the arms embargo continues into the future.

There needs to be pressure also on Russia and China. I’m deeply concerned about the reports, but it’s not surprising, of China and engagement, continued engagement with the regime and the mullahs, trying to somehow go around what the freedom-loving people of the world are trying to do to change the behavior of the totalitarian regime and provide more opportunities for the Iranian people. So, China and Russia need to stop their activities and work with us to provide more opportunities for the people of Iran.

And I finally just want to say God bless you all. We stand with you. There are many actions the United States Senate that I’m supporting and many others are supporting on both sides of the aisle to stand with the brave Iranian people. At least 1,500 were killed in these last protests, likely more. So many more imprisoned. You are putting everything on the line for your God-given freedoms. God bless you all, our prayers are with you, and we stand with you that you will be free.