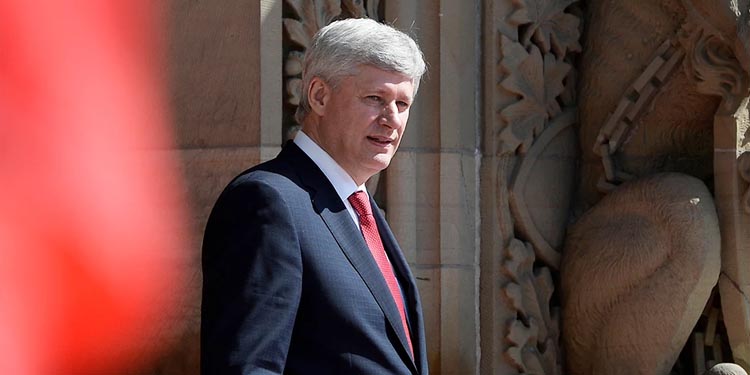 "I say stand with Maryam Rajavi and with all those people and organizations around the world who seek a free, democratic, and peaceful future for Iran and its people," Stephen Harper

The Iranian opposition coalition National Council of Resistance of Iran (NCRI) managed to hold this year’s annual gathering virtually on July 17. Given the novel coronavirus pandemic and its restriction, many dignitaries commended the NCRI’s ability and determination for connecting 30,000 locations to Ashraf-3, home to members of the People’s Mojahedin Organization of Iran (PMOI/MEK).

Here is the speech of Mr. Harper:

Governments and people may be united in the fight against coronavirus, but in Iran, the regime and the virus are united against the people. We will never know the real number of coronavirus infections and deaths in the mullahs’ regime. But what we do know is that no country was so quickly overwhelmed by the cases and so unable to genuinely help its people.

And it was unable because it is unwilling. The regime’s priorities remain not the health and welfare of its citizens but the spread of its ideological hatred, the backing of its regional terror network, and of course the furthering of its apocalyptic nuclear program. What greater proof can there be of the regime’s evil and unreformable nature than its fanatical adherence to nuclear weapons ambitions during a pandemic devastating its population. But that’s what has happened.

The Ayatollah’s regime has breached almost all of its commitments under the JCPOA nuclear deal, continue to accumulate low enriched uranium, continuing its work on nuclear missile delivery systems, and continuing to keep its nuclear facilities operating and continuing to refuse to grant access to inspectors, no doubt to cover up the true scale of its deception.

But deception is no substitute for strength. And the regime is not strong; it is weakened. Today its allies from Lebanon to Syria and Iraq and Yemen and Gaza are experiencing enormous economic pains and popular unrest.

And of course, with the economic situation deteriorating at home, corruption rampant with explosions and fires widely reported, street protests continue to break out in Iran itself. They do so despite the real risk of death for the protestors and despite the disinformation campaigns that the regime wages against its opponents, including most frequently against this organization.

Still, the regime has never looked weaker than at the very moments when it has tried to show strength. Yes, it was able to shoot down a defenseless commercial airliner, killing 63 of my fellow Canadian citizens and many others in the process.

But its attempt to hit back at those who can defend themselves, at America and Israeli and Saudi assets, those have been brushed away like annoying insects, with its supposedly all-powerful terror leader Soleimani eliminated in the blink of an eye. The regime is ready to fall and the regime is ready to be replaced.

This organization, the National Council of Resistance of Iran (NCRI) has adopted a 10-point plan including democracy and free elections, pluralism and human rights, justice and the rule of law, peaceful coexistence and gender equality, private property and a market economy, the separation of religion and state, and of course, a non-nuclear Iran.

Friends, I’ve never claimed to be able to tell the Iranian people who their government should be, only that it is the Iranian people themselves who have the right to choose it. But surely this 10-point plan is what all people of good faith wish to see in a reformed and reborn Iranian nation.

So, I say stand with Maryam Rajavi and with all those people and organizations around the world who seek a free, democratic, and peaceful future for Iran and its people. Friends, continue your struggle, keep hope alive, and prepare for the new Iran that will come to pass through your efforts. And thank you for allowing me to be part once again of this great event. Good health and blessings to all of you. Hazer, hazer, hazer.