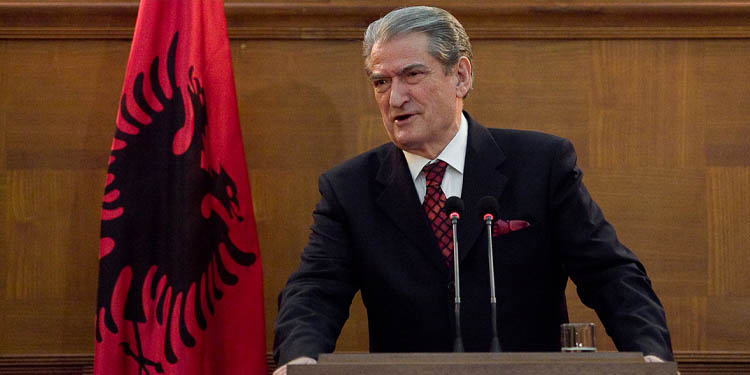 "I am proud to support your movement and that Albania is your second home today. Complete severance of diplomatic ties with the regime of Iran is a necessary step," Sali Berisha said.

Former President and Prime Minister of Albania Sali Berisha joined the Online Free Iran Global Summit. In his remarks, Mr. Berisha said, “I am proud to support your movement and that Albania is your second home today. Complete severance of diplomatic ties with the regime of Iran is a necessary step.”

Here is the speech of Mr. Berisha:

Honorable Madame President Rajavi, distinguished senior officials, parliamentarians, congressmen, senators, and prominent friends of the Iranian resistance, freedom fighters participating in the Free Iran Global Summit, ladies and gentlemen, it is a special honor and privilege for me to greet Madame President Rajavi and all leaders of the National Council of Resistance of Iran, members and supporters of your strong movement for a free Iran, all those who participate in this event from dozens of countries around the world, and I wish the Global Summit of Free Iran complete success in its work.

Dear friends, 2020 is one of the most difficult years for humanity since the time of the Second World War due to the COVID-19 pandemic, from which 14 million people have suffered until today and nearly 600,000 lost their lives.

But this year has been more severe than all the others for your compatriots in Iran who face the uncontrolled pandemic and the mullahs’ savage oppression with killings, torture, and imprisonment of hundreds and thousands of members and supporters of your movement. But with all this, I think this summit finds your resistance as the only real hope for the liberation of your strong nation and closer to the realization of its major goal: a free Iran.

The uprising of November 2019 with 1,500 sons and daughters, the free martyrs of your nation who fell to become immortal, deeply shook the foundations of the mullahs’ regime. The well-deserved punishment of the notorious terrorist leader, Qassem Soleimani, dealt a fatal blow to the regime.

The latest U.S. Congressional resolution and the resolution submitted to the UN Security Council have raised to a new level the international condemnation of Iran’s dictatorial regime and the international support for the NCRI and Madame Rajavi’s free democratic, secular and non-nuclear Iran.

Likewise, the recent acts of psychological war and demonization campaigns by the mullahs prove that today the mullahs’ regime is weaker than ever and that it is heading toward the end it deserves.

For all this, your nation’s trust in the NCRI and President Rajavi and the regime’s horror at your freedom movement are greater than ever. I am proud to support your movement and that Albania is your second home today.

I have appreciated the expulsion of the Iranian ambassador from Tirana, abut I think the complete severance of diplomatic ties with the mullahs’ regime would be the most necessary response to the terrorist acts planned against you. In conclusion, I wish that in the near future the summit will be held in Tehran, the capital of a free Iran.