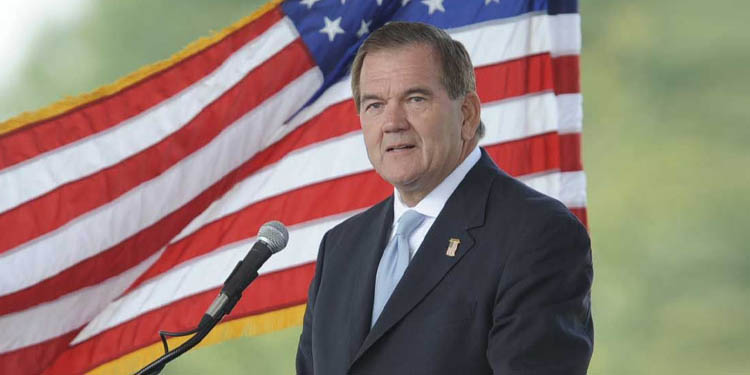 "I’m certainly been privileged and honored to be working with you and in concert with the extraordinary group of men and women that support Madame Rajavi, for almost 15 years," Tom Ridge said.

Former Governor of Pennsylvania and First U.S. Secretary of Homeland Security Tom Ridge joined the Online Free Iran Global Summit. In his remarks, Mr. Ridge said, “We say to the regime and to the people of Iran and the people of the world that we stand with Maryam Rajavi and the goal of regime change in Iran.”

Here is the speech of Mr. Ridge:

At the outset, I do want to recognize the leaders of Albania, several of whom who spoke previously. I’ve had the good fortune of knowing many of them. I know full well the spirit of their politics and how difficult and challenging it can be.

They have strong opinions and they (often differ), but the fact that they’re united in providing home and support and protection to Ashraf 3 is something that’s very important to their friends in the United States, and so I simply want to express my appreciation and that of the United States delegation present with us today in thanking you for your sustained support and commitment, not just to human rights, but to the men and women of Ashraf, and we thank you.

And Madame Rajavi, I must tell you that in meetings such as this, I am often reflecting on the words of that fundamental document that set America on its course to freedom, our Declaration of Independence.  And if you’ll permit me to edit those first few words just a bit, consistent with your goal for the Iranian people, I’ll remind everyone of those solemn and powerful words, “We hold these truths to be self-evident:  that all men and all women are created equal, that they are endowed by their creator with certain unalienable rights, and in among these are life, liberty, and pursuit of happiness.”  It is your pursuit, that is, so pursuit of the men and women of Iran, it is our pursuit. I stand with Maryam Rajavi.

At this point, in this very unique and unprecedented global summit, I think we should take a moment and consider what we’ve accomplished to date and the message that we are sending to the Iranian regime by gathering today.  All of us, united by technology, say to the regime, say to the people of Iran and freedom-loving people everywhere around the world, that all of us stand with Maryam Rajavi, and all of us stand in support the goal of regime change.

Think about this for a moment, ladies and gentlemen. Think about how unique this is and how important it is to the rest of the world where you have individuals in 100 and plus countries, in over 30,000 locations, nearly 1,000 Parliamentarians, political dignitaries and human rights activists all joining in this global summit. It’s a rather remarkable achievement, but it’s an even greater reflection of a growing worldwide commitment to the cause of freedom in Iran.

Think about this as well:  a global pandemic, Covid-19, could not deter the world from gathering in support of your cause.  We’ve come together, Madame Rajavi, to publicly, proudly, and loudly profess our support for you for the NCRI, for the MEK, and for the cause of freedom.

We all stand with you, Maryam Rajavi.  If a global—if a global pandemic—if Mother Nature is ill-equipped to silence us, to keep us from gathering in support, you know that the mullahs can’t possibly do it.  They have tried again and again, and they have repeatedly failed.

They tried last year to disrupt the meeting in Paris, and they failed. Over the years, they’ve used harassment. They’ve used intimidation. They have used fear to control or soften or eliminate the voices of freedom. They have failed. Over decades and decades they’ve imprisoned, they tortured, they murdered thousands and thousands of your fellow citizens to silence their voices, to silence the call for freedom, to silence the call for regime change. Again and again, they have failed.

The hardliners have been confronted time and time again, because of the global support for the principles for which you stand: universal suffrage, gender equality, a non-nuclear Iran, freedom of speech, and separation of religion and church.

And as recently as November of last year, and January of this year, citizens have again risen in protest, many sacrificing their lives to express their support for the cause of freedom, and again, and again, they have failed. They will continue to fail Madame Rajavi.

They will continue to fail. Their grip of oppression grows weaker every day. The voices of freedom grow louder and stronger and more powerful every day. And this unique and unprecedented gathering demonstrates in the most poignant and powerful way possible, that global support for you, for regime change, for the NCRI and MEK gets stronger, larger, and louder every day. And I’m certainly been privileged and honored to be working with you and in concert with the extraordinary group of men and women that support you, Madame Rajavi, for almost 15 years.  I look forward to the day when I can join all of you in Tehran.