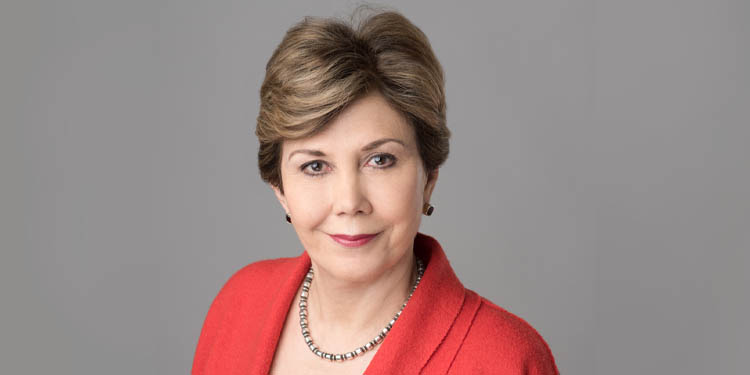 "Maryam Rajavi has been a beacon in the wilderness to gather together those who support a free Iran," Linda Chavez said.

Former White House Director of Public Liaison Linda Chavez joined the Online Free Iran Global Summit. In her remarks, Ms. Chavez said, “The Iranian regime fears Madame Rajavi because she stands for ideas of liberty and her ten-point plan is the best hope for the freedom of the Iranian people.”

Here is the speech of Ms. Chavez:

Thank you very much and greetings to you, Madame Rajavi, and to all of those tens of thousands of people who are gathered virtually. It is a real tribute to the organizational skills of the NCRI that we could pull together in the middle of a worldwide pandemic this kind of gathering to bring together old friends and new friends in support of freedom for the people of Iran.

You know, we’ve been through a lot together over the last decade. When I first came to the first meeting of this organization in Paris, there were still members of the MEK in Camp Ashraf in Iraq. Soon we were working to try to increase the living conditions in Camp Liberty, which was misnamed because there was no liberty there for the MEK members.

And thankfully, because of the work of many of the people who have been a part of this movement, we saw finally those individuals moved to Albania, and thanks to the work of our many, many distinguished supporters. And now I think we are able to focus entirely on our efforts on the real struggle, the struggle for freedom for the people of Iran.

We’ve seen again over the last few years uprisings in big cities and small cities across Iran people who were pushing for more food, better jobs, a better economy, but also importantly, more freedom, for the right to be able to select their own leaders, to be able to live in a country that honored civil liberties.

We’ve seen in this last year, the toll that the pandemic has taken, and Madame Rajavi talked about the 70,000 people who are dead in Iran from this terrible pandemic. The fact is, we don’t know how many people have died. That’s really an estimate of those we can see.

There are people dying every day in Iran because of the collapse of the medical system and the total indifference of the regime towards their plight. The regime has been interested in only one thing over the last many years, and that is in building a nuclear weapon.

That has been where the regime has put their top brains and their money is to try to build a destructive weapon. Well, even that now seems to be collapsing, as we saw with the explosions at Natanz and other explosions, mysterious explosions around the country.

So, there’s no question that Iran is collapsing. The regime is collapsing. But the real question is, what will take its place? And who will take the place of the ayatollahs? And who will decide who will take the place? Well, we know one thing. We know who the regime fears are going to take its place. And we saw no better evidence of that than in the attempted bombing of the 2018 gathering of the NCRI in Villepinte, France.

That was an attempt to take out Madame Rajavi and to kill as many of the supporters and terrorizing those who would dare to stand up to the regime. As Louis Freeh and others have talked about today, thankfully we have seen that that plot was not only interrupted but that the people who are involved in that are going to come to justice. They have been arraigned this week and we are hopeful that they will remain behind bars for the rest of their lives.

Well, why is it that the regime fears Madame Rajavi? Is it because she has tanks? Because she has guns? Because she has soldiers who are going to attack the regime? No, it’s not for any of those reasons. It’s for the simple reason that she stands for ideas of liberty. That her ten-point plan is the best hope for the freedom of the Iranian people.

She has been a beacon in the wilderness to gather together those who support a free Iran in which the people of that country can enjoy equal freedoms, equal rights before the courts, they will have the power to assemble, the right to express their own views, and the right to worship as they choose.

So, that’s what the regime in Iran fears most. And I am so proud to be here with others who have supported Madame Rajavi to say to the regime, your time is coming. We’ve waited a long time but your days are numbered. And those who will replace you will do so not at the barrel of a gun but with the strength of their ideas. And I say to all of you, hazer, hazer, hazer. Thank you very much.