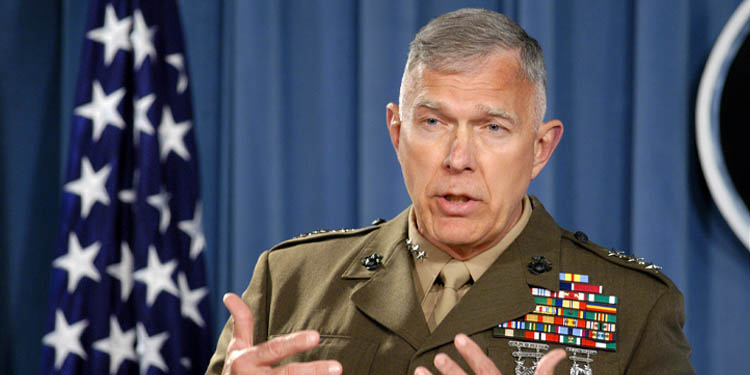 "The NCRI has done much over the years to correct what is happening in Iran," said Gen. Conway.

General James Conway, 34th Commandant of the U.S. Marine Corps joined the Online Free Iran Global Summit. In his remarks, Gen. Conway said, “The NCRI has done much over the years to correct what is happening in Iran.”

Here is the speech of Gen. Conway:

Greetings to the patriots of Iran and their supporters from throughout the globe. The regime has had a tough year. The sanctions, unfortunate as they are for the good people of Iran, have had a dire effect on the regime. Gross domestic product is off 15 percent. Oil exports are down over 250 percent. The rial is at 50 percent of its previous value and inflation is at 45 percent.

Other speakers have talked about the brave protestors in the street in November and January. I won’t repeat their courageous story. But I would challenge all of us in attendance here to name one other civilized nation that when its people go to the streets to express displeasure, shoot them dead in the streets. The answer is there is no other country that does that except for Iran.

Madame Rajavi and others have spoken about the hearings that are now underway in Belgium. I won’t elaborate except to say that it should be an embarrassment to a nation every day that those hearings convene.

The NCRI has done much over the years to correct what’s happening in Iran. I would encourage you to reach out to the mothers of Iran. Women are the centerpiece and in some ways the strongest part of your movement now, but those mothers are concerned about the future for their children and even for their grandchildren, and if they understand your approach I am convinced you can win them to your side. I’ll quote a great American humorist that said, quote again, “Men will be moved to action when women make up their mind.”

On 3 January of this year, your movement was handed what I think was a tremendous gift, that gift was the death of Qassem Soleimani. The man had the mentality of an assassin and he was incredibly vicious in carrying out his duties. But none can argue that he was also extremely efficient and effective at what he did. It’s said that he was the second most powerful man in Iran. Certainly, I think he may have been the most notorious in the government and in the military.

When your fellow Iranians take to the streets for what will be the last time, they will not have to face Qasem Soleimani at the head of the Revolutionary Guard.