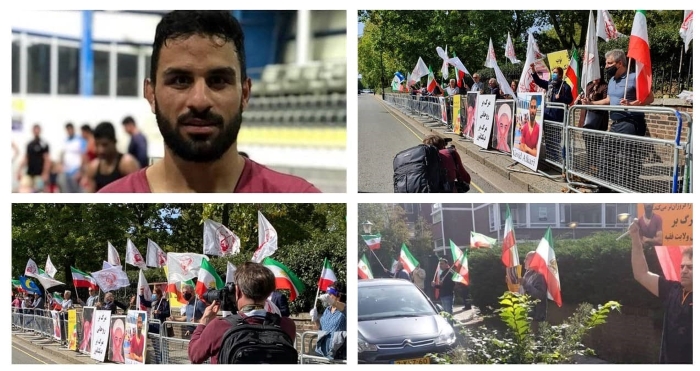 Political prisoner Navid Afkari, a 27-year-old wrestling champion in Iran, has been executed by the genocidal mullahs’ regime in the early morning hours of Saturday, September 12, according to state-run media.
This horrific crime has taken despite a global campaign calling on the regime to revoke this innocent young man’s death sentence.

A number of governments, international organizations and athletes from across the globe had joined this call to save Navid’s life.

The Iranian regime executed Navid in total defiance of the international community. This desperate yet criminal act by the mullahs’ regime, like the execution of Mostafa Salehi who was also arrested during the Iran protests, is to intimidate the arisen people of Iran and thwart an uprising.

Regarding Navid Afkari’s execution, Mrs. Maryam Rajavi, the president-elect of the National Council of Resistance of Iran (NCRI), said: “The people of Iran, especially the courageous youth, will not remain silent vis-à-vis the savage execution of this brave son of Shiraz and will rise up in solidarity with the heroic people of Fars Province over his unjust execution. The religious dictatorship ruling Iran cannot survive for even one day without suppression, execution, and torture.

Afkari, executed for taking part in protests back in August 2018, described the horrific physical and psychological tortures inflicted on him by the regime’s authorities.
“For around 50 days I had to endure the most horrendous physical and psychological tortures. They would beat me with sticks and batons, hitting my arms, legs, abdomen and back. They would place a plastic bag on my head and torture me until I suffocated to the very brink of death. They also poured alcohol into my nose,” the letter reads.

Protests by Iranians supporting the Iranian resistance in various countries

Iranians, supporters of the People’s Mojahedin Organization of Iran (PMOI-MEK) and the NCRI staged protests in many European countries England, Netherlands, Belgium, Denmark, Austria, Norway, Switzerland, Sweden and other countries to protest against this brutal execution of Navid Afkari.

The video and some reports of the Iranians demonstrations:

England, London: Supporters of the Iranian resistance protest against the brutal execution of the young champion Navid Afkari with chants of “Down with Khamenei” and “Down with Rouhani”.

Iranians, supporters of the NCRI and PMOI/MEK stage a protest rally in front of the embassy of the criminal and bloodthirsty mullahs’ regime against the cruel execution of the wrestling champion Navid Afkari. This regime is doomed to collapse.

Netherlands, Hague – Saturday 12 September 2020: Iranians, supporters of the National Council of Resistance of Iran (NCRI) and the MEK in Netherland, stage a protest rally in front of the embassy of the criminal and bloodthirsty mullahs’ regime in Hague against the brutal execution of the wrestling champion Navid Afkari. This regime is doomed to collapse.

Belgium, Brussels: Iranian community supporters of the MEK/ NCRI make an Urgent Action in Brussels in front of Mullahs’ embassy.

Switzerland: Iranian dissidents take up photos of Navid Afkari in Switzerland after his execution this morning to awaken world leaders of continuous crimes against humanity.

Sweden: Outside the Swedish Parliament after hearing about execution of Iranian wrestler Navid Afkari.