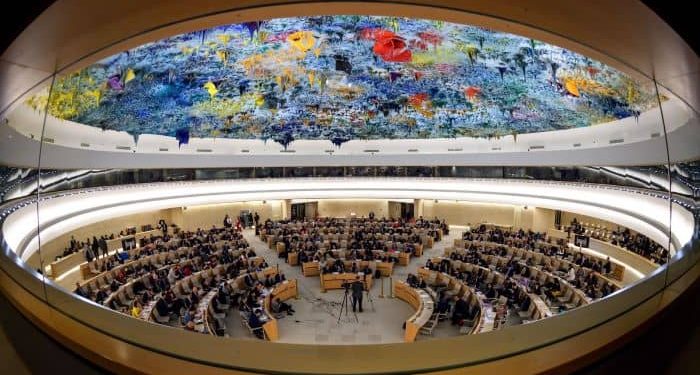 During the current session of the UN Human Rights Council, which will continue until October 7, 2020, the UN Office in Geneva has circulated a joint written statement submitted by 21 international Non-Governmental Organizations demanding bring to justice the perpetrators of the 1988 massacre in Iran.

During the current session of the UN Human Rights Council, which will continue until October 7, 2020, the UN Office in Geneva has circulated a joint written statement submitted by 21 international Non-Governmental Organizations demanding bring to justice the perpetrators of the 1988 massacre in Iran.

Excerpts from this statement are as follows:

We appeal to the United Nations (UN) and its Member States to investigate the 1988 massacre of political prisoners in the Islamic Republic of Iran and to hold the perpetrators of that ‘ongoing crime against humanity’ accountable.

Following a fatwa handed down by Supreme Leader Ayatollah Khomeini in mid-July 1988, more than 30,000 political prisoners, primarily affiliated with the People’s Mojahedin Organization of Iran (PMOI or MEK), were secretly mass executed over several months after mock trials lasting just five minutes. Their corpses were doused with disinfectant, packed in refrigerated trucks, and buried at night in mass graves across the country.

Call for accountability and justice

United States of America (U.S.) State Department spokesperson Morgan Ortagus on 17 July 2020 called on1 the international community to conduct independent investigations into the 1988 massacre and to provide accountability and justice.

An investigation in 20172 by London-based NGO, Justice for the Victims of the 1988 Massacre in Iran (JVMI), uncovered the identities of 87 Death Commission members. Many still hold senior positions in the Iranian Judiciary or government. They include Judiciary Chief Ebrahim Raisi and Justice Minister Alireza Avaei.

In 2018, Amnesty International also investigated the massacre, pointing out that Khomeini made the decision to carry out this crime against humanity as soon as he was forced to accept an UN-backed ceasefire in the Iran-Iraq War.

In its report “Blood-soaked secrets: Why Iran’s 1988 prison massacres are ongoing crimes against humanity,” Amnesty International called on the UN to set up an independent investigation to help bring those responsible to justice.

The fatwa issued by Iran’s Supreme Leader has never been rescinded. On 25 July 2019, in an interview6 with the state-run Mosalas magazine, Mostafa Pour-Mohammadi, Advisor to the Judiciary Chief and a former member of the Death Commissions, defended the 1988 massacre and said newly-caught PMOI activists would face the capital punishment….

Thousands of political prisoners are at risk of execution today

In August 2020, political prisoner Mostafa Salehi was executed by the Iranian Judiciary for his role during the anti-government protests of 2018. He was one of a number of protesters to have been sentenced to death in recent months. Thousands of other protesters are also at risk of being secretly executed in the country’s prisons….

Reuters reported on 23 December 2019: “After days of protests across Iran last month, Supreme Leader Ayatollah Ali Khamenei appeared impatient. Gathering his top security and government officials together, he issued an order: Do whatever it takes to stop them. … About 1,500 people were killed during less than two weeks of unrest that started on November 15”.

Human rights group believe as many as 12,000 protesters have been arrested.

Crimes against humanity are not bound by the statute of limitations, and even though the1988 massacre was perpetrated 32 years ago, it is still prosecutable today. Iranian officials brazenly claim Khomeini’s fatwa still stands against the PMOI dissidents. The perpetrators of the 1988 massacre today run the Iranian government and Judiciary. The survivors are still alive, and the evidence is all readily available.

We believe that until the international community holds the perpetrators of the 1988 massacre to account, Iran’s authorities would continue to be emboldened to further crack down with impunity on present-day protesters. Iranian officials construe silence and inaction by the international community as a green light to continue and step up their crimes.

Remarks by Senator Bob Menendez at the Trans-Atlantic Summit on Iran Policy; September 18, 2020