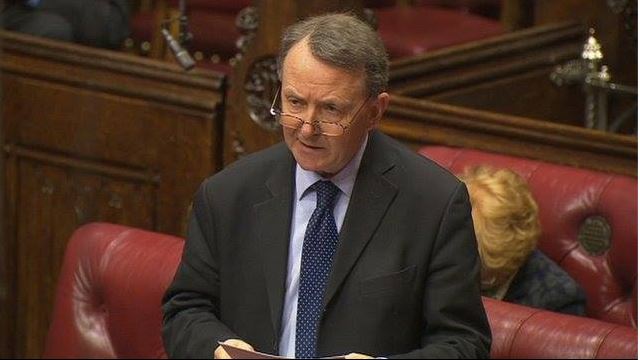 Lord Alton of Liverpool, Member of the House of Lords, addressed an online event on October 15, 2020, on the Iranian regime’s terrorism and how it undermines global security.

Lord Alton of Liverpool, Member of the House of Lords, addressed an online event on October 15, 2020, on the Iranian regime’s terrorism and how it undermines global security.

The event, hosted by the National Council of Resistance of Iran (NCRI). Members of Parliament of the U.K. and Irish politicians joined the online conference. Also, many Iranians supporters of the MEK and the National Council of Resistance of Iran (NCRI)from various countries participated in the event. They focused on the fact that the Iran’s regime is a critical threat to global security, which is especially true considering the mullahs’ terror plots in Europe.

The event came in the wake of new threats by the regime’s incarcerated diplomat-terrorist Assadollah Assadi. Assadi, who arrested following the regime’s foiled bomb plot against the NCRI’s “Free Iran” gathering in 2018 in Paris, threatened Belgian authorities with attacks by the mullahs’ proxy groups if he is found guilty.

The foiled bomb plot in 2018 and Assadi’s threats once again underline the need for European countries to take firm action against the mullahs’ regime.

Lord Alton of Liverpool, Member of the House of Lords in the Iranian opposition NCRI online conference—October 15, 2020

Colleagues and friends, it’s great to be with you today for this important conference on Iran. Once again, it gives us the opportunity to shine a light on the egregious criminality of the Iranian ruling elites. As recently as September 2nd, we were reminded of the regime systematic brutality and ruthlessness when Amnesty International published its investigative report into the actions of the Iranian authorities since the nationwide popular protests in Iran just one year ago.

We now know thousands were arrested, including women and children, and that they were subjected to widespread torture including floggings, electric shocks, stress positions, mock executions, waterboarding, sexual violence, forced administration of chemical substances, and the deprivation of medical care. And this report says that Iran’s police, intelligence and the security forces, along with prison officials were all culpable and participated in the shocking atrocities, all of which are clearly prosecutable offenses under the law. But the complicity of Iran’s judges, and the prosecutors is merely the latest example, in a long history of justice distorted, and justice denied. Forced to recall that these same authorities recently executed an Iranian wrestler champion, Navid Afkari, after arresting him and his brothers in connection with protests against the regime. This was despite an international appeal to stop his execution. It became clear to anyone who followed the case that his death sentence came after an unfair trial and a confession, which was extracted under torture.

Having been in northern Iraq a few months ago, I’m acutely I’m sadly, only too well aware of what the regime’s state terrorism and destabilizing activities mean for the stability and for the people of the region, not least for the long suffering of Kurds, Assyrians, and other minorities there.

The regime’s poisonous tentacles reach beyond the region. The organizers of today’s event are right to express their concern about how the regime openly threatens the security of Europe and European citizens by engaging in bombing plots against the opposition, the NCRI, and Iranian dissidents on European soil. In this respect, I welcome the forthcoming trial next month in Belgium of the arrested Iranian diplomat alleged to have been involved in bombing the NCRI gathering in Paris. I vociferously condemn any attempt by the regime or its agents to threaten the court in an intimidatory attempt to influence the outcome. A Great British Prime Minister once said, “Justice delayed is justice denied.” That’s the time that Iran’s regime was made to answer principle, terrorism, and the long awaited denial of justice rectified.

European governments and United Kingdom were making it clear to Tehran that under no circumstances will they accept any intervention from the regime seeking to influence or to intimidate the court and to subvert the rule of law and the administration of justice. Since 2018, the surge of Iran backed terrorism against Iranian dissidents in Europe, and the reports of the widespread use of torture and execution against those protesting against the regime, to which I referred, underlines the need for the United Kingdom Government to refer the regimes of palling violations of human rights to the United Nations Security Council, and to designate the leaders of this regime as perpetrators of crimes against humanity and sponsors of terrorism.

At a very minimum, the United Kingdom should be seeking a referral and a preliminary investigation by the International Criminal Court. If that is vetoed and blocked by other security council permanent members, fearful of having a light shined on their own violations of human rights, we should lead the way in establishing a regional tribunal to bring those to justice, who have been responsible for the brutality and for the use of state terrorism. And these attempts to silence all opposition.

The United Kingdom should also work with the United States to maximize pressure on Iran and use our new global human rights legislation. To impose targeted sanctions on officials and leaders of the clerical regime, just as the UK Government recently did in Belarus, the Iranian people are the ones who decide the future of their country. And they have a democratic alternative in the NCRI led by Madame Rajavi and her 10-point democratic platform for a future Iran.

We in the UK and Europe must recognize that they stand for principles that we embrace, and we must stand with the people of Iran in their quest for a better future. The same great statesman who said but justice delayed is justice denied. Also, once said, “You cannot fight the future, because time is on our side.” That is most certainly true for those committed to peaceful democratic change in Iran.

Statement by the (A.P.A.D.A.R) in Romania on the Eve of the Anniversary of the Nationwide Iran Protests in November 2019