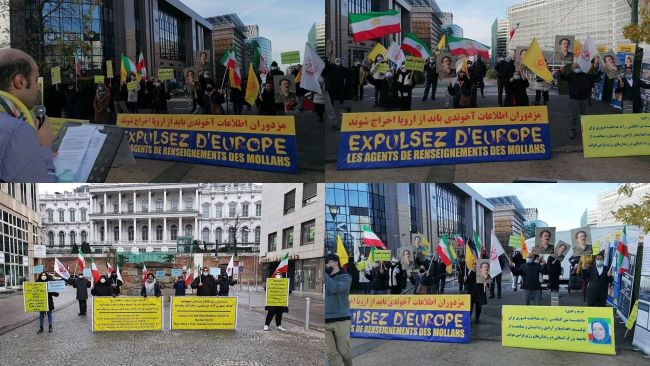 Iranian Diaspora members and supporters of the People’s Mojahedin Organization of Iran (PMOI/MEK) and the National Council of Resistance of Iran (NCRI) in Europe held twin rallies in Vienna and Brussels on December 16, 2020, to protest the Joint Commission of the Joint Comprehensive Plan of Action’s (JCPOA) meeting with the Iranian Foreign Ministry.

The annual meeting usually takes place in Vienna but is being held virtually because of the pandemic.

The protesters said: “The important thing is that the idea of mending fences with a terrorist regime is still there. Individuals don’t count, the nature of this regime is terrorist, and it is a bad idea to deal with terrorists.”

They held banners with the slogans:

The meeting is being held at the same time that Iranian diplomat Assadollah Assadi and three of his accomplices are on trial in Belgium for terrorism. The prosecutor, who is calling for Assadi to serve 20 years in prison, said that Assadi acted on the orders of Zarif and other regime officials when he tried to blow up the 2018 Free Iran rally in Paris, which was attended by 100,000 people.

This was highlighted by protesters who demanded that diplomatic relations with Iran be curtailed, urging Europe to:

The people said: “We call on the European Union to stop its policy of appeasement of the mullahs’ regime in Iran. The EU should shut down the regime’s embassies, which are centers of terrorism and espionage. The EU should take these measures because the regime continues executions, torture, repression, terrorist operations, and enriching uranium for obtaining a nuclear bomb.”

The Assadi File: A Terrorist Plot That Could Have Caused a Disaster