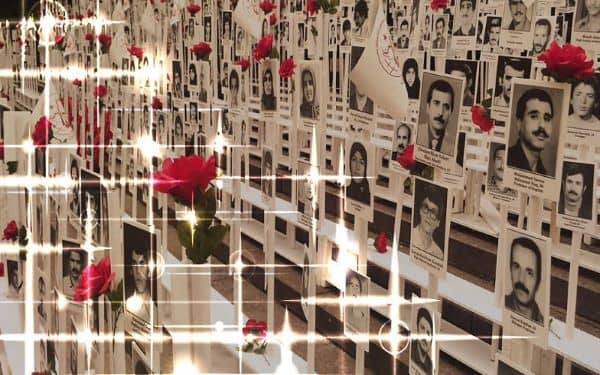 Pictures of the martyrs of the 1988 massacre of more than 30,000 political prisoners that the majority of them belonged to the People’s Mojahedin Organization of Iran (PMOI/MEK)

It has been suggested by some that the 1988 massacre happened so long ago that it might as well be forgotten but some of Iran’s judiciary is being run by the ‘thugs’ who ordered the massacre 33 years ago.

Ebrahim Raisi, who sat on the Death Commissions that carried out the executions of more than 30,000 political prisoners, many of whom were supporters of the People’s Mojahedin Organization of Iran (PMOI/MEK), is today the country’s Judiciary Chief.

The 1988 Death commissions, composed of Raisi and former Minister of Justice, Mostafa Pourhammadi, among others, were established throughout Iran following a fatwa issued by the Supreme Leader Ayatollah Ruhollah Khamenei.

The decree demanded that the Death Commissions immediately execute every supporter of the MEK in Iranian prisons who still remained loyal to the organization. One month after the massacre, additional prisoners were executed for being associated with other opposition groups.

The MEK explained: “One of the worst things about these secret executions was that families were never told, so they couldn’t even wish their loved one’s goodbye. They were hanged from cranes, then disinfected, and were buried in secret mass graves throughout Iran.”

On September 3, 2020, seven UN Special Rapporteurs told Iranian authorities that the 1988 massacres ‘could amount to crimes against humanity’ which warrants an ‘international investigation’. The regime failed to respond to the report that was made public.

Justice for the Victims of the 1988 Massacre in Iran (JVMI)

Justice for the Victims of the 1988 Massacre in Iran (JVMI), is a non-governmental organization based in London, that is now representing the victims’ families. Many survivors have been interviewed, and the organization have received hundreds of written testimonies from the families demanding justice.

The MEK said: “This whole problem should have been solved years ago but Europe and the world as a whole have been afraid to intervene in Iran’s affairs. This has meant many political prisoners since 1988 have also been executed for their political beliefs.”

Last December, Foreign Ministers of the EU promoted a ‘global human rights sanctions regime’ aimed at targeting anyone responsible for any serious human rights violations. On December 17, the European Parliament voted in favor of a resolution demanding that Iran releases the truth about the massacre while requesting that the EU uses the new ‘Magnitsky Act’ to impose sanctions on the Iranian officials perpetrating the abuses.

On December 23, 2020, the United Kingdom’s Human Rights Minister, Lord Ahmad of Wimbledon, encouraged the authorities in Tehran to allow a UN Special Rapporteur on Iran, Javaid Rehman, access to the country so that he could undertake investigations into the massacre and other human rights violations.

The MEK reported: “The UN High Commissioner for Human Rights, Michelle Bachelet, has formally established a commission of inquiry to undertake an investigation into any crimes against humanity that took place in Iran in 1988.”

The families of the massacre victims are hopeful that when the EU Foreign Ministers next meet in Brussels on January 25, that they target those responsible for the massacre with the new sanctions.

Iran: People’s Poverty a Result of Sanctions or Plundering by Corrupt Mullahs and IRGC Terrorists?