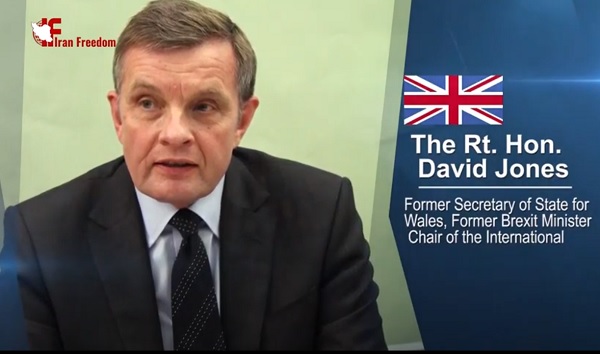 David Jones MP, Deputy Chairman of the European Research Group addressed an online global conference on the conviction of Iran’s diplomat-terrorist Assadollah Assadi by a Belgian court for attempting to bomb the 2018 Free Iran gathering in Paris.

On February 4, 2021, simultaneous with the court ruling against the Iranian regime’s diplomat-terrorist, Assadollah Assadi, and his accomplices in Antwerp, Belgium, a global online conference was held, where Mrs. Maryam Rajavi, the President-elect of the National Council of Resistance of Iran (NCRI), and dozens of prominent figures from various European countries, the United States and Canada, joined thousands of Mujahedin-e Khalq (MEK/PMOI) members based in Ashraf-3 (Albania) as well as the supporters of the Iranian Resistance worldwide.

The Belgian court rejected Assadollah Assadi’s claim of diplomatic immunity and sentenced him to 20 years in prison. The three intelligence agents, Nasimeh Naami, Mehrdad Arefani, and Amir Saadouni, were sentenced to 18, 17, and 15 years in prison, respectively. Their Belgian citizenships was also revoked.

I’m very pleased to be with you today for this important conference. I’m particularly pleased that it’s attended virtually by Mrs. Maryam Rajavi and residents of Ashraf 3.

This morning’s verdict of the Antwerp court in the trial of the Iranian diplomat Asadollah Asadi and his three accomplices, who was sentenced to maximum terms of imprisonment for terrorist offenses, is an event of the most profound international importance.

It puts an end to the false narrative that the acts of terrorism of which they were accused with a work of hardliners or so called rogue elements within the Iranian regime. Asadi is an accredited diplomat.

Therefore, the entire regime must answer for his actions including the Minister of Foreign Affairs, Javad Zarif. After today’s verdict, we in the United Kingdom are now looking to the British government to announce what action it will be taken to counter Iran state terrorism, which has now been shown beyond doubt to pose a serious threat to the security of the United Kingdom and Europe.

One immediate step should be for the Home Secretary Priti Patel to give urgent consideration to prescribing the IRGC in its entirety as the terrorist organization, a move that was recently recommended by the House of Commons – Foreign Affairs Committee and has wide cross-party support in both houses of parliament.

There are growing calls from parliamentarians for Dominic Raab and the Foreign, Commonwealth and Development Office to work with the Home Office to pursue such a prescription, which should also extend to the entirety of Iran’s Intelligence Ministry, part of which was prescribed by the UK and the EU in January 2019 for their part in the bomb plot against the NCRI’s gathering in Paris.

The UK and the EU should both toughen their current conciliatory policy on Iran. That policy has, to a large extent, embodied their regime and has led him to believe that he could get away with terrorist activities on European soil, targeting the pro democracy opposition and its leader Mrs. Rajavi.

Global Britain should take the lead in developing firm policy on Iran as an international level. This should include downgrading diplomatic relations with Iran and contemplating the closure of Iran’s embassies and, where appropriate, the expulsion of diplomats given the regime’s role in promoting terrorism on European soil and holding British and European citizens hostage.

Any return to a normal relationship should then be contingent upon the verifiable dismantling by Iran of its terrorist operators and credible undertakings not to engage in state terrorism again.

Finally, I want to take this opportunity to pay tribute to the work of the NCRI and its president-elect Mrs. Rajavi. This is undoubtedly an historic day for the Iranian people and the popular struggle for a free and democratic Iran. And congratulations also to the law enforcement agencies on the European continent. Their hard work and professionalism has ensured that those who terrorize the people of Iran and seek to export that terrorist activities are brought to justice.

My best wishes to the people of Iran and the cause of justice in that great country. Thank you.