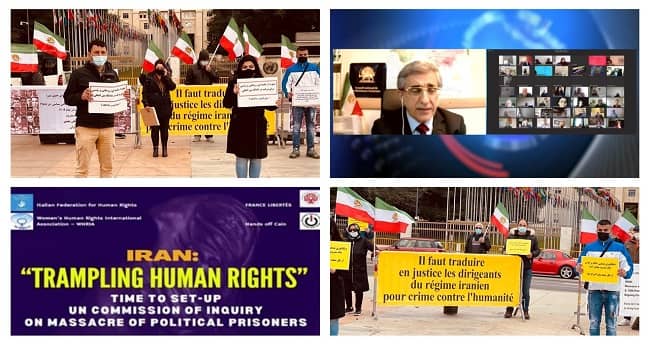 Simultaneous with 46th HRC session, a virtual conference held on March 11, 2021. Justice for Victims of 1988 Massacre in Iran (JVMI) hosted this online conference.

They remembered that 1988 massacre of political prisoners, which has been described by seven UN Special Rapporteurs as a crime against humanity.

Simultaneously to the online event on the 1988 Massacre, Iranians gathered in front of the UN headquarter in Geneva.
They chanted: “All Iranians‘ desire is the condemnation of the perpetrators!“

Iranian supporters of the MEK said, once again we gathered in front of the UN in Geneva to boycott Iran’s regime ongoing crimes against humanity, and we demand an independent UN commission of inquiry on the 1988 Massacre.

In summer 1988 the Iranian regime summarily and extra-judicially executed over 30,000 political prisoners held in jails across Iran. The massacre was carried out on the basis of a fatwa by the regime’s then-Supreme Leader Ruhollah Khomeini.

Most of the victims were members and supporters of the People’s Mojahedin Organization of Iran.  Members of the Death Commissions, who at the time sent the prisoners to gallows, include the regime’s current Judiciary Chief Ebrahim Raisi and Justice Minister Alireza Avaei.

“There is a systemic impunity enjoyed by those who ordered and carried out the extrajudicial executions and enforced disappearances. To date, no official in Iran has been brought to justice and many of the officials involved continue to hold positions of power including in key judicial, prosecutorial and government bodies responsible for ensuring the victims receive justice,” the UN experts wrote.

The UN experts also criticized the international community’s inaction regarding the 1988 massacre. They underlined that this inaction “had a devastating impact on the survivors and families as well as on the general situation of human rights in Iran and emboldened Iran to continue to conceal the fate of the victims and to maintain a strategy of deflection and denial that continue to date.”